On May 30th, Adam Morris wrote a bit at Lone Star Ball about this being the toughest portion of the Rangers' schedule in 2010, saying going .500 over this 20 game stretch would be a success. That was something I agreed with, and with one game to go, the Rangers have ensured at least as much, getting their 10th win tonight in Atlanta.

If you happen to be a displaced Rangers fan, without the use of an illegal stream, you did not get to watch tonight's game thanks to Major League Baseball's insane blackout policies, but Eric Nadel and Steve Busby called a good one. Or, at least, a strange one.

Before an out was even recorded, the Rangers had a 2-0 lead, thanks to an Ian Kinsler walk, followed by a single from Elvis Andrus and a ROE by Josh Hamilton. With a patented Andrus-Hamilton double steal in the third and a Michael Young single, the Rangers had a 4-0 lead by the third inning. Stranded runners kept the offense from really breaking out, but the offense mostly had a fine day, with every position player reaching base at least once for the second straight game, and Andrus leading the way with three hits and two stolen bases (including home).

Unfortunately, the stranded runners meant the Braves got to climb back in to it. A Nelson Cruz error in the third kept the inning alive and allowed a run to score, with another run after to make it 4-2. That's where it stayed while the weather put the game in to hibernation in with two outs in the fifth; one out short of an official game.

To that point, Matt Harrison, was rolling. He had five strikeouts, just one walk, and 76 pitches. He had allowed two runs, but both came following a two-out error, so nothing earned. The rainout, it seemed, meant Harrison's good start would be turned over to the pen early, at best, or wasted, at worst.

Instead, the Rangers sent him out following more than a two hour break, and he answered the call well. Through another inning and two thirds, he seemingly suffered no loss to command or velocity, finding the zone nearly 80% of the time against his final six batters faced, and hitting the radar with higher numbers than he had in the middle innings, with another strikeout. A cutter against Brian McCann didn't cut, found too much of the plate, and was sent over the wall for Harrison's first -- and only -- Earned Run allowed in the game, but all told Harrison looked good, with 11 swinging strikes, 67% of his pitches in the zone, few hard hit balls, and nothing lost after a long rain delay.

His first replacement, Yoshi Tatayema, continued to do what he's done by crushing his opposition, striking out all three batters he faced. Tateyama has now struck out 12 of the 52 batters he's faced, and has not yet given up a walk; it might be time to be excited about him. Darren Oliver did not do so well, blowing the save with a Dan Uggla double after an error, but he managed to recover with a Wilkin Ramirez strikeout while the winning run was on second. Fortunately, on this night, that only delayed the Rangers win.

The 10th inning was the Adrian Beltre inning. During the rain delay, a lot of callers told Bryan Dolgin the Rangers needed to remove Kinsler from the lead-off spot, but Kinsler was just fine there today, as his lead-off single resulted in the game's first run, and he then led the 10th off with a double. That ended up being the winning run thanks to a Beltre double, and Beltre helped protect that lead in the bottom half by knocking down a hard hit Dan Uggla shot before recovering to throw him out at first. That play was bookended by two Neftali Feliz strikeouts, with eight swinging strikes in the perfect inning to close it out, and it might just be time to stop worrying about Feliz. It's scary he has the potential to be really bad like he was earlier in the season, but he has looked good to untouchable for a while now.

This game in some ways was a microcosm of this 20 game stretch. It started out very well, looked to be in jeopardy for a while, and ended up being just fine. Texas has clinched a win in Atlanta, and they have a shot Sunday to sweep. A sweep on the road is always good, and a sweep of a serious playoff contender on the road is great. If they pull that out, it would mean a winning record during the hardest portion of the 2011 schedule, even after some awful performances in Minnesota and New York, and that would be cause for some minor celebration.

It's all going to be okay, it seems. 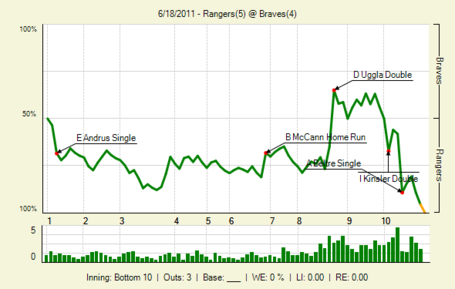 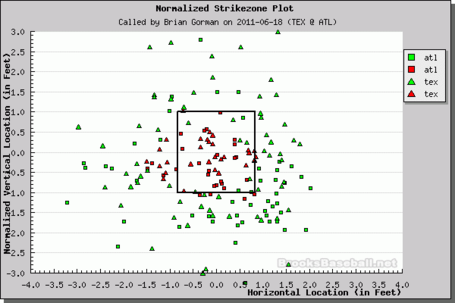