Tonight was something of a microcosm, it seemed, of Colby Lewis's season. At times, he was as good as 2010, if not better, striking out 10 Braves with 16 swinging strikes; six on his fastball, which approached 93 miles per hour at times. At other times, he was awful -- in the same game -- with three walks, only enough efficiency to throw in to the seventh inning, and a few pitches hung over the plate. Two flat breaking balls and a high-80s fastball found the center of the plate and were hit hard, two leaving the park for solo home runs.

It's what Colby Lewis seems to be this season. At times, the command is perfect and he's unhittable. His slider makes people look stupid even on his bad days, but only on his good days -- or in his good innings, tonight -- does he have the command of his fastball to make that matter. Fortunately tonight, there was enough good, and enough help from the defense, for the net result to be good enough for a win.

Of course, some of that defensive support was himself.

Thanks to the offense, the Rangers' five game losing streak fell in comfortable fashion. The hitters piled on young Randall Delgado for the first loss of his career with 12 total hits; four from Josh Hamilton, who hit a home run that seemed to find the stands as quickly as it touched the bat. Only the pitchers (hooray National League baseball) failed to reach base, each of the top five hitters scored runs, and Michael Young and Nelson Cruz combined for three doubles. Meanwhile, Neftali Feliz had another good outing with four swinging strikes -- including one a breaking ball -- and just two balls thrown in a perfect ninth inning to end it.

Though while it was comfortable, in a lot of ways, the Rangers were not quite as good as 6-2 shows tonight. Lewis had 10 strikeouts, but the Braves are one of the easiest teams in baseball to strikeout. The offense scored six runs on the road, but it was against a guy making his debut. Still, a win is a win, and the Rangers needed one badly. After three awful series in a row, the promising start to this difficult string of games was in danger of being wasted, but a win to open the last series of the stretch puts Texas in position of needing just to split the final two to escape with a .500 record -- which should be considered a success -- and have themselves a chance to do even better.

And at least they did it without too much drama. 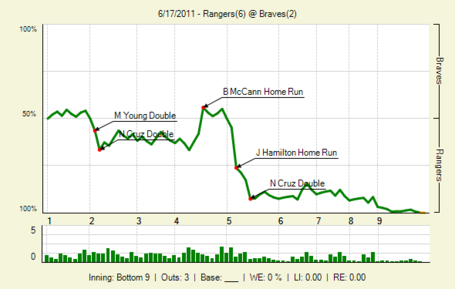 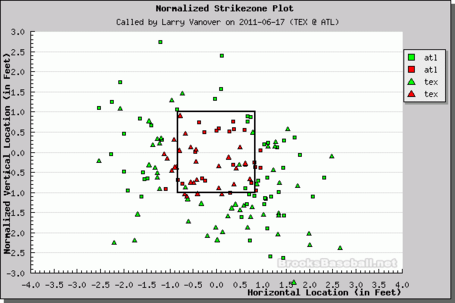