No No-No, At Least

Share All sharing options for: No No-No, At Least

Francisco Liriano has had a bad season thus far, but he has also had a good career when he has been healthy, and has some incredible stuff. Amusingly, in the midst of a bad season, he threw his first career no-hitter on a day when his stuff was not quite there for him.

Today, his stuff was there for him, and that was a Rangers nightmare. Without lefty-killer Mike Napoli, the Rangers threw out a heavy LHH lineup against Liriano, and the combination was a disaster. Most of the game was simply the terror of a potential no-hitter, or worse, as Liriano was perfect through six innings, making the Rangers look completely foolish at the plate. This was no lucky perfect start -- though there was some good Twins defense -- this was simply a combination of a very good pitcher and a very out of it lineup.

In the seventh, Elvis Andrus reached on an error, and the perfect game was broken up, but Liriano still finished the inning with a no-hit bid. At that point, it was still a one run game, but the way Liriano was pitching it felt over. The eighth, however, saw the no-hitter quickly broken up by an Adrian Beltre single, and then even the shutout broken up Yorvit Torrealba singled him home.

Unfortunately, the Liriano "melt down," likely, to how long Liriano had to sit during the bottom of the seventh, where everything fell apart for the Rangers. Thanks to some good luck, Matt Harrison had managed to keep the Twins off the board outside of one run in the first, but he was nailed by a Danny Valencia b-line to start the seventh, and had to leave the game while Valencia reached first. Mark Lowe replaced him, and was not as lucky (or as good).

Lowe has actually been a pretty good reliever this year, especially for someone who is just supposed to be bullpen filler and not getting the big leverage. Sunday, though, he was really bad. Nearly every plate appearance resulted in solid contact, and with a couple of balls just past Andrus and his first homerun allowed on the season, he allowed five runs (including Valencia) against just two outs.Though we should be careful about taking Lowe's good season at face value -- since it was just over 16 innings pitched prior to today -- we should be even more careful about taking this one game as a sign that he is suddenly bad. Regardless, he was very bad and took a close game and put it out of reach.

Maybe the way it ended felt better than a 6-1 game normally would, because the Rangers at least managed to carve out a couple of hits and a run when a perfect game seemed imminent. Maybe Mark Lowe had trouble getting ready on short notice. Maybe (likely) this was a game the Rangers were going to lose more often than not, anyway. It was still the ugly end to a very ugly series. Buried inside was a dominant Rangers victory, but otherwise it was an overall one-sided 1-3 performance in Minnesota, which has seemingly become a house of horrors for Texas.

This 20 game stretch which is the hardest of the year most likely is still going well, though now just barely. Thanks to this awful series, and the poor performance against Detroit, a lot of the good done by beating up on Tampa Bay and Cleveland has been undone. It is still far from time to panic, of course, but it is frustrating how quickly a feel-good stretch can turn in to something that is merely OK. 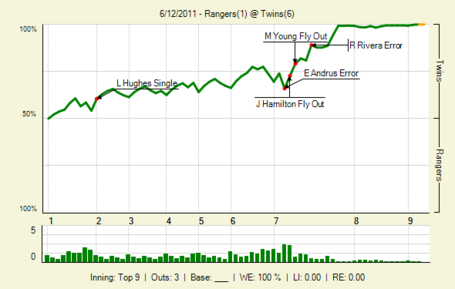 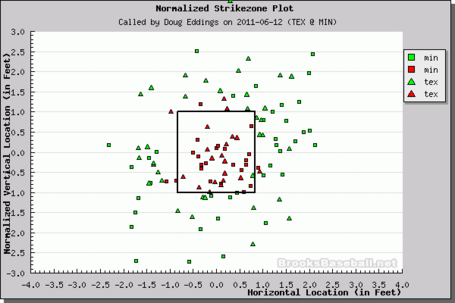