Share All sharing options for: Colby Lewis Stokes The Fires Of Panic

It was over as quickly as it began.

Colby Lewis began the year with a few bad starts, looking like something might be wrong and the rotation might be in trouble. Then settled down, looking more like his 2010 TORP self from the end of April to the start of June, and fans had reason to think everything would be okay going forward.

Now, Lewis has strung together two games that are not just bad but horrendous in a row, and panic is probably going to hit a new high. This was awful. 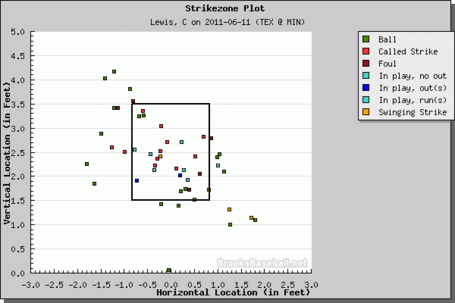 That was Colby Lewis today. His velocity was actually not particularly alarming, and the slider continued to make guys miss, but the command was terrifying. Through his fifty pitches, he struggled to find the strikezone, and when he did found it -- as those bright blue squares tell you -- he found a lot of it, and the Twins turned those fat pitches in to hard base hits. He allowed five runs to start the first, another run in the second, and he -- and the Rangers -- were done quickly on national television.

The offense was nearly equally pathetic, doing nothing against Scott Baker, allowing him to throw a complete game with just one run scored. The offense will have a bad day now and then, and this was one of them. They've had more than enough good days to make this a blip on the radar. For Lewis, though, this was a very bad sign. He's still been very good very recently, and showed that for a while this season, but for two games in a row now he hasn't even been good enough to be the last man in a Major League bullpen, let alone a top starter for a team with at least aspirations of making the playoffs. Few outside of the Rangers likely know what's wrong, how to fix it, or if it even can be fixed, but this is scary until we hear or see something.

A bad game all around, and not much to say about it other than the Rangers were awful. If they can manage to win tomorrow, they get a split on the road, which -- even against a hobbled Twins team -- is never a bad thing, but it will be hard to feel good about merely getting a split in Minnesota with a game this ugly on the record.

One more note for Fox on their national broadcasts: Get someone who actually does their homework before the games. Mark Grace had snarky comments about how the Rangers prefer to slug the ball but play awful defense, which is so off the mark it would be hilarious if it wasn't being spouted by the color man to a national audience. He coupled that with great insights, such as saying Scott Baker is good because he "just takes the ball," or how the Rangers' key to the game was "stay the course," while the Twins' key to the game was "just keep playing." Perhaps he was just too busy with other things this week to be on top of the teams he was supposed to cover, but he was awful and unprepared, and he chose to mask that inanity with snark and bad jokes. The game was bad enough to watch, but Fox made it even worse with a horribly inadequate analyst in the booth.

Hopefully you enjoyed your Saturday. Better days ahead. 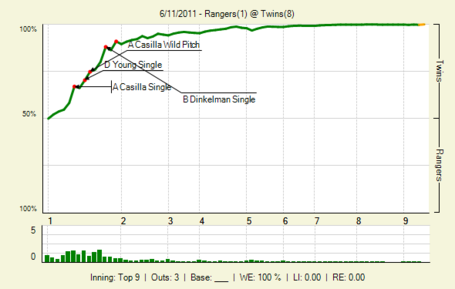 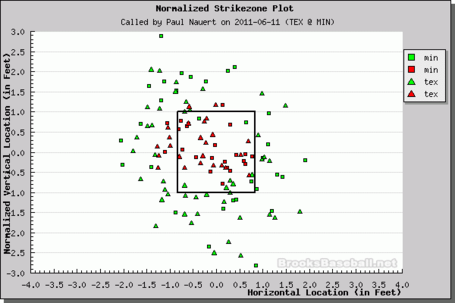