The Rangers scored seven runs in the second inning to take a 7-0 lead in a game threatened my inclement weather. Familiar script, right?

Except, this time, the Rangers got to keep playing, and, as they likely would have the last time, coasted to an easy victory. Their first win ever in Target Field, in fact.

It was a day that was all about how awesome the Rangers position players were. Every Rangers starter but Andres Blanco and Nelson Cruz had a hit. In fact, every Ranger but those two, Elvis Andrus, and Josh Hamilton (who had a double) slapped multiple, and Michael Young showed good signs of breaking out of his slump with three hits to lead the team. It wasn't just the offense, though, it was the defense, highlighted by an incredible assist to third by Cruz and amazing infield stops by Adrian Beltre and Andrus.

What was unusual was the Rangers scoring nine runs with only two extra base hits the whole game. Every other hit was a single, they just mostly came in the second inning. Beltre opened the inning with the Rangers' only walk of the game (against just three strikeouts), and ended the scoring with a double for the only extra base hit of the inning. In between, there were six singles -- Hamilton making the only out -- and a reached-on-error. Beltre added another RBI single in the fourth, and Young did so in the sixth to give the Rangers nine runs with almost no power. For one day, the Rangers were an early 20th century baseball team, excelling on putting everything in play they could and hoping to string together enough singles to score runs. It was nothing if not exciting, and put the game out of reach early.

The strangeness of the game may just have been influenced by the umpires' decision to keep playing through the rain, which was particularly heavy in the second. Brian Duensing is better than a seven runs in two innings pitcher, and the weather at least had a small part in that, maybe a larger part. The Twins pair of errors in the inning came when Jason Repko slipped in the wet outfield and Alexi Casilla couldn't handle a strange hop on the infield grass. Those directly lead to runs and baserunners, and who knows how much trouble Duensing had hitting his spots in the rain.

On the other side, C.J. Wilson's performance -- outside of runs allowed -- was not necessarily his best, either. With three walks and a hit batter to just one strikeout on three swinging strikes, he was probably a tad lucky to have gone seven innings with three runs allowed. With the weather the way it was, it's not hard to believe that was the reason Wilson had trouble missing bats or finding the zone Friday (Dana DeMuth's small zone didn't help, either). We know he's better, and one game in the rain probably means even less than one game normally does.

Regardless, even without some good luck and defensive help, Wilson still pitched well enough to win handily simply because the Rangers did a better job than the Twins of punishing a pitcher battling the elements. For the ninth time in 15 games, they've delivered cheap Papa John's pizza to the people of the Metroplex, and, after an 8-0 Cardinals loss, it gives Texas the second best run differential in baseball. 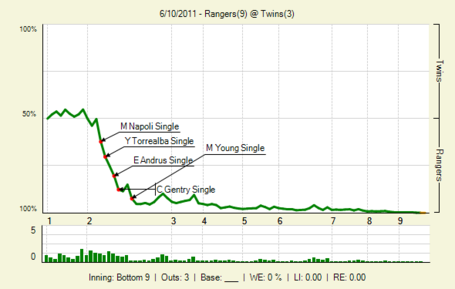 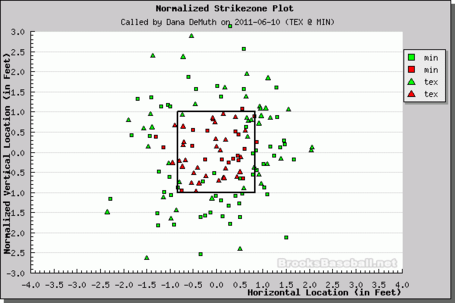