The Fun Of The Human Element

Share All sharing options for: The Fun Of The Human Element

The usual recap writer, unfortunately, was too busy yesterday to really watch the game or sit down and write anything about it, but if he had, he would have had a bit to say about umpiring being allowed to operate the way it does in baseball.

Fortunately, Adam Morris covered a lot of that in his A.M. post at Lone Star Ball. (He's also an instant credibility boost!)

In the fifth inning last night, umpire Paul Nauert just flat out blew a call when Elvis Andrus tagged Rene Rivera while Rivera was still a step off of the second base bag.  It looked like a blown call live, replays showed that it was clearly a missed call, and it could have been reversed and rectified in the time Ron Washington spent out on the field arguing the call.

It is an obvious, correctable mistake, and instead of using the technology readily available that would allow those mistakes to be rectified, MLB is choosing to simply stick its head in the sand and continue to let umpires make calls that, within thirty seconds, everyone watching the game on TV can see was missed.

It's frustrating, to be sure. As usual, I'll qualify with the statement that umpires probably do better at there job than any of us would do -- at least without their years of experience. The problem is not that they're relatively bad, the problem is that human's just can't call baseball particularly accurately without help. As Adam says, help could be very easy.

Yet, baseball is okay having games altered by human error outside of the players more than it has to be. Another aspect of Fun Human Element Adam didn't touch on is how the winning runner -- which should have been the tying runner -- actually reached base in the first place: 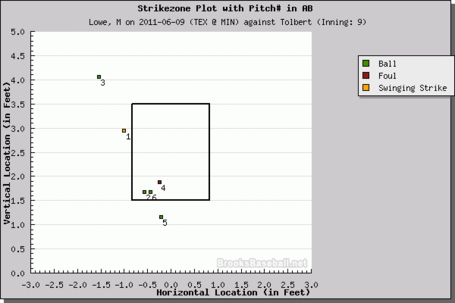 That's the Mark Lowe walk that put on the eventual winning run. Pitch six was a full count check swing on a pitch that was likely a strike, anyway. That's not the most egregious location of a ball, but the low strike was actually called Thursday, so there was some inconsistency here. This is less of an easy fix than adding instant replay, but another problem that doesn't need to exist.

To borrow from Adam, it's maddening that this is just ignored. Part of why it's ignored is probably that more casual fans -- and even a lot of non-casual -- probably don't pay close attention to how often there are issues. With that in mind, if this gets just one person to realize there's a problem and it can at least be looked in to being corrected, I'm happy.