Colby Lewis Makes It All Better

Share All sharing options for: Colby Lewis Makes It All Better

I didn't watch Wednesday's Rangers game live, so when I went to MLB.tv to watch the replay, I already knew the Rangers were going to win, I just didn't know anything else.

Watching every pitch in rapid succession, what was apparent was that David Price was on. Eight strikeouts, no walks, 19 swinging strikes, command of the zone, and seemingly unhittable. It was like watching a movie that you know has a happy ending, but the way it's shaping up, a happy ending doesn't even seem possible. What deus ex machina could the writers have possibly concocted to explain how things can look so bleak and yet everything turns out okay?

In this case, though, the writers (the baseball gods) managed to settle on the believable, they just stretched it a little bit. The hero was Colby Lewis, who was almost as good as could be. He may not have been as dominant as Price, but it was enough against the Rays. Colbyashi's fastball velocity, his on-again/off-again concern in 2011, sat just under 90 miles per hour, at times topped 91, and very inquiringly was there early (which it often is not for him) and never faded, right up to his last pitch. He got seven swinging strikes on his always dominant slider, another three on his fastball, and managed to target the zone on more than 68% of this throws. He was precise, he was nasty, he had eight strikeouts to just two walks, almost literally no solid contact, and allowed just four hits; none between the third and eighth innings.

Of course, when you pitch like that, there's a good chance you're not going to give up a run, and the dominance of David Price is a little less concerning. In the fifth, Adrian Beltre hit a long fly ball over the B.J. Upton's head for a double, and Nelson Cruz singled him on on the next at bat to put the Rangers on top to stay. Neither is a stretch to do something with the bat, but given the struggles offensively they have both had at times this season, having the winning run come from the two of them off of Price is a feel-good story.

The deus ex machina came courtesy of Craig Gentry, who managed only the second extra base hit of the game off of Price with a two-out double in the eighth. The rest of the way things went according to script, with an Ian Kinsler walk, a patented Ron Washington call for a double steal, and an opposite field single by Elvis Andrus to bring them both home for insurance runs. Andrus stole second and third to give the Rangers four steals in the inning, and while they ended up being inconsequential, and the Rangers never even needed those runs to win thanks to Lewis, it was inspiring to see the offense manage to do just fine even on a day when one of the best pitchers in baseball was dealing.

DID YOU KNOW: Elvis Andrus's 1.7 Wins Above Replacement, per FanGraphs, place him just one run out of a third among shortstops in the American League, and put him roughly on pace for better than an All-Star caliber season, and close to the level Joey Matschulat terms "elite."

Also encouraging was Neftali Feliz, who was still not his old dominant self, but showed some improvement with a shut-out ninth to close the game. Feliz called on his usual velocity, but was still able to find the zone on more than two thirds of his pitches -- including his one breaking ball -- moved around the zone, and managed a whiff. He did have a couple pitches that found a lot of the zone, one of which was roped for a lead-off single, but it was a rare appearance this season where Feliz looked like a guy who belonged in a Major League bullpen, and was a good sign to cap off a great game.

The Rangers went in to Tampa and won a series, beating the Rays a combined 18-10. The offense looked good, the pitching looked fine overall and great at specific points, and the results were all it should have taken to make a Rangers fan happy. Sure, they were one retired hitter from sweeping, but a sweep in Tampa would be incredible, a mere win is still very good, and they looked good doing.

Texas began a rough portion of the season with a good showing and a winning record. The angsty portion of 2011 may be slowly subsiding. 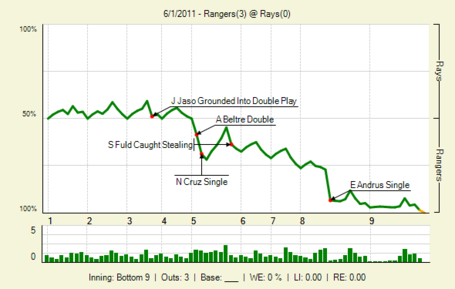