You may not have noticed this, but for the past 14 months, Derek Jeter has been bad. Last season, he was a touch better than mediocrity, but he struggled in October, and has been terrible in 2011. Very terrible. Coming in to tonight, he had an OPS of .597 and (.704 is average) and a .267 wOBA (.314). Coming in to tonight he had all of three extra-base hits on the season -- all doubles -- for an isolated slugging of 0.026. His line drive rate was at a career low last season, and has plummeted from even that. In short, he has looked washed up. His old body that was already poor defensively now can't hit balls hard to save his life, and if his 0.1 Wins Above Replacement through the first 30 games of the season doesn't improve, the Yankees will have a serious, expensive problems on their hands.

So, you could imagine it was slightly alarming when Dave Bush's last pitch of a start he only got because of an Alexi Ogando blister ended up being Derek Jeter's first home run of the season to make a game that was once 4-0 a one run Yankees deficit.

And if that was alarming, then Jeter's second home run, this time off of Arthur Rhodes, which gave the Yankees the lead, was an embarrassment the Rangers never recovered from. And embarrassing Rangers' pitching was the theme tonight.

Jeter is a future hall of fame player with many great seasons, one of the greatest offensive shortstops to ever live. Once upon a time, giving up hits to him was not a bad sign. This year, giving up four hits would be hilarious if it wasn't off of your team, and two of them leaving the park is a tragedy if it was. Those two home runs were the big swings in the game, both for how they altered the score, and for how much they told the story of why this game was terrible.

Dave Bush is a bad pitcher. He has had a couple passable seasons, but those were a while ago. The fact that he was bad is no shock or surprise. He wasn't supposed to start, it's unfortunate that he started, and it was not likely to go well when he faced CC Sabathia. But the Rangers staked him an early 4-0 lead, and that will usually be enough, even with Dave Bush on the mound. Bush didn't pitch well, going just four innings with two strikeouts, five hits, and three runs allowed (one unearned), but it could have been a lot worse. When he left, the Rangers hat a 4-3 lead, but when the match-up was Bush vs. Sabathia, you'd have problem taken that.

The only going four innings, though, was the big issue, because that introduced the Rangers bullpen. The Rangers' bullpen proceeded to give up three walks and 16 hits. Ryan Tucker was lucky to only give up a run over his two innings, but was not terrible. Similar story for Mark Lowe and his one and a third innings. But the more back-of-the-pen filler you bring in to a game, the more likely it is that someone will fall apart, and that someone was Cody Eppley, who came in after the Rangers had pulled to within one, and could not get an out before loading the bases and allowing a spine-crushing Nick Swisher grand slam. It was over for the Rangers at that point, but it wasn't over for Eppley's collapse, as he managed an out before walking Curtis Granderson and surrendering another home run, this one to Teixeira.

For Eppley, that was seven batters faced, with three singles, one walk, two home runs, and one in-play out.

The bullpen struggles were not just filler, of course, as one of the guys the Rangers were supposed to count on, Rhodes, gave up two home runs in his inning, which he entered tied. All the good vibes that came from his key strikeouts last night were gone with two swings of the bat. He recovered to get a strikeout and a double play, and his inning didn't end up being the difference thanks to Eppley, but it was one more additional bullet point on the list of Rangers pitching sadness.

The offense, again, was fine. Ian Kinsler, Michael Young, and Mike Napoli all had balls -- unlike Jeter -- die just at the track when the game was still a game. If any of those manage to go out, or if an iffy Elvis Andrus strikeout pitch is called a ball with two runners on in the 4th, maybe this game goes differently, who really knows. It's not likely, but five runs in a game started by CC Sabathia is fine, especially when it could have easily been more. Just like it used to be, the issue is pitching.

The Rangers are still probably fine in 2011, even if they aren't right now. The back of the bullpen is unlikely to stay this bad, Feliz is back, and Ogando will likely be in there to help soon. Colby Lewis continues to look more and more like the guy he was in 2010, C.J. Wilson continues to look more and more like he's even better, and Derek Holland has shown some nice improvement towards finally being a good Major League pitcher. If those three continue their trends -- minus Holland's dreadful third inning last night -- and Tommy Hunter, soon back, can return to his career average, the rotation will just need a fifth starter who can pitch well enough to belong in the Majors and the rotation is fine. And more innings from the rotation will help the bullpen, as well. Then, even if the pitching isn't great, the returns of Josh Hamilton and Nelson Cruz will help both the offense score enough to make up for it, and the defense prevent enough to help.

But for right now, after this game, until those things happen, this season is hard to watch. There have been mediocre Rangers teams before, but never after a pennant run, and watching this after the start in April to defend the AL title is very hard. With a shot to finally win a series, against a very good team even, they turned in a 4-0 lead to a 12-5 blowout thanks to home runs from weak hitting middle infielders on the wrong side of 35 and grand slams to people who bleach their goatees. It was an awful and painful and pathetic loss during an awful and painful and pathetic run.

Hopefully that run will be over soon, but I also feel like I keep having to say things like that for one more series.

On a side note: Is anyone else getting sick of the suspense over seeing whether or not the ump called any low strikes? 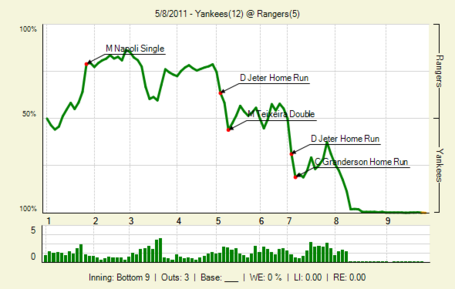 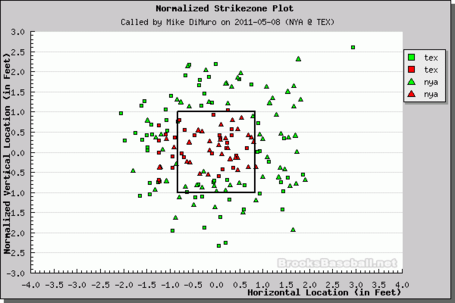