Share All sharing options for: Rangers Don't Lose To Yankees

Julio Borbon is the Rangers' best defensive centerfielder. He's quite possibly the only person who can be trusted to man the position, as David Murphy cannot handle it, and putting Josh Hamilton there only increase his already gigantic odds of injury. Texas, unfortunately, needs to play Borbon in center, and that means they need him to hit.

Tonight, Borbon hit. He had two hits, including a triple, and three of the Rangers' RBIs. His Win Probability Added was 12%, way behind Michael Young but no one is questioning Michael Young's bat this year, so we can smile about how great he's been hitting and keep talking about Borbon.

So, great, he hit tonight, but he hasn't been hitting on the season, right? Well, right, and wrong.

Borbon's slash line of .268/.312/.338, prior to tonight, is not good, certainly. It's better than it looks once you dive a little deeper, though. That's an OPS of .649, one point behind last season, so that doesn't suggest much improvement. (Update: His OPS is actually up to .703 after tonight.)

The difference is, a .649 OPS in 2011 isn't the same as a .649 OPS in 2010. See, the league wide OPS in the AL is down from .734 last year to .707 this year. While the league has dropped, Borbon, so far, has not. His weighted On Base Average is up to .298 while MLB average is down to an incredibly low .315. While conventional wisdom would say "that's just April conditions," offense actually went down after April last year, and usually does not raise a whole lot from April to October (and Borbon is playing in those same April conditions).

Borbon's offense, while still not good, has improved. At this same rate, even after park adjustments, if you coupled this offense with above-average-to-good defense, you're talking about a solid Major League player. Maybe you could benefit from a platoon (Gentry, perhaps?), but you're not killing yourself by going ahead and playing him in center instead of someone who can't play center.

Oh, and the good signs go beyond that. Borbon is swinging at pitches out of the zone less frequently, and swinging at pitches in the zone more often, two things that you can probably look at as reasonably stable already. He's also whiffing a bit less frequently, which is also something that's not a particularly small sample. He's not walking more, but at least he's making more, good contact. He's also more than doubled his rate of line drives. If it looks like he's hitting more ropes that just go directly to fielders, when they don't turn in to triples, it's because he is. Now, there's a way to go to see if he's really turned in to a hard-hitting machine, but it's also deep enough to believe there might be some real improvement. His regressed wOBA from StatCorner (wOBA adjusted for a player's batted ball profile) places Borbon's expected wOBA at .359 this season, even after adjusting for Arlington, which would be the second best performance by an AL centerfielder so far this year. If that line drive rate doesn't stay up, he won't put up a .360 rate, but he doesn't have to in order to be good, let alone solid. Somewhere in the middle of where he's been and where he may have been without some poor luck is an above-average baseball player. Not an All-Star or an MVP candidate, but someone you can play in centerfield to keep Josh Hamilton healthy and David Murphy from hopelessly chasing down balls.

Because this isn't a Julio Borbon article but actually a game recap, here are some bullet points:

Tomorrow, the Rangers have chance to take more games in a series than they surrender. That is called winning, and it would be a good thing. 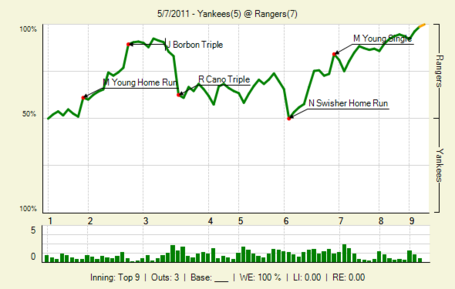 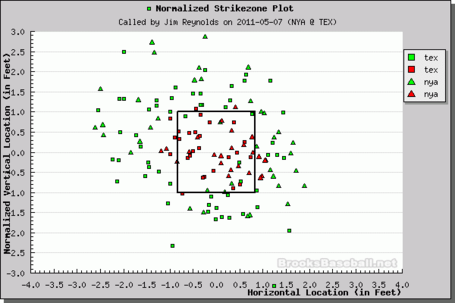