Tonight, the Mariners did not dramatically outplay the Rangers. Seattle didn't make much better contact. They had two more hits, but two fewer walks (and six fewer strikeouts). The difference was one player who you've met before: Justin Smoak.

Almost as though he holds a grudge for the Cliff Lee trade, Smoak was a one man wrecking crew for the Mariners tonight. Of those eight Seattle hits, three were from Justin Smoak, including a double and the game's only home run.

Okay, giving it all to Smoak is a bit much, as he never scored or knocked in another run after the home run, but without his two other hits, perhaps Colby Lewis handles Luis Rodriguez (whose RBI double proved the winning run) a little more crisply. And perhaps he doesn't fall behind 3-0 to Ichiro Suzuki in the seventh with two outs and a runner on second.

Alright, fine, it's a stretch. Smoak did not really alter the game by himself. But he was really aggravating to watch.

Also aggravating was the way Colby Lewis started the game, with his fastball velocity once again missing, and without the velocity he cannot get away with pitches over the plate. A fastball ended up being launched in to the seats by Smoak, and a change-up right in the middle was turned in to a ground rule double by Rodriguez.

Let, despite that start, Lewis ended up battling back to have another decent start in a row. Even with the poor velocity at the start, he managed to average over 89 miles per hour on his fastball, topped 90 several times, and did so consistently over the last half of his start. He managed 11 strikeouts against just one walk, a complete (shortened) game to once give the bullpen a second night off, and even garnered a whopping 16 swinging strikes. After Rodriguez, the only run came on a weak hit by Suzuki, and three runs surrendered on the road in a complete game is pretty good.

It might behoove you to shrug the start off as being a result of facing the Mariners. You'd be right to say the Mariners helped, but you'd be wrong to make that excuse for Lewis's numbers entirely. Seattle walks around 10% of the time, not the 3% of the time they did tonight. They strike out 22% of the time, not the 34% of the time they did tonight. On top of that being in a home performance. Lewis benefited from facing a bad offense, but he made that bad offense look even worse than they actually are. Thanks to the start, which continued some of the troubling signs he's shown this year, it was yet another game where he wasn't up to the standard he showed he can reach last season, but it was the third game in a row from Colby Lewis that you should be fine with.

The problem tonight was the offense. I don't know why they decided to take the night off against Doug Fister, but they did. Ian Kinsler had the only extra base hit, a double. Michael Young had two of the three walks. There was undoubtedly some bad luck in there, as well as a Kinsler rocket that I'm pretty sure carries out in most parks, but that doesn't completely excuse the weak contact, or the complete disinterest in taking pitches. Vargas was throwing strikes, but either they weren't hittable and the Rangers were swinging anyway instead of working the count, or they were hittable and everyone just had an off night. I'm not a scout so I can't tell you which one it was, but, either way, it was really annoying. Kinsler is probably exempt for making some good contact. Young is probably exempt for getting himself on base three times against a pitcher who was hitting the zone pretty consistently. The rest of the offense, though, had a really bad performance against a not really good pitcher, the same kind of thing that always ended up getting Lewis losses last year.

Yet again, this was just another game. Unlike the first game in this series, it managed to not have an emotionally devastating finish, and losing a series on the road is never a huge problem, not even in Seattle. The problem is not this game individually, it's that these unremarkable losses -- games and series -- are continually adding up. They're not bad in isolation, but they're really bad when they just keep getting strung together. There are still no signs that we should be panicking about the Rangers' just not having the talent we expected, but you don't get a second chance on losses. The losses need to stop sooner, rather than later, or the pennant race will be less than comfortable. 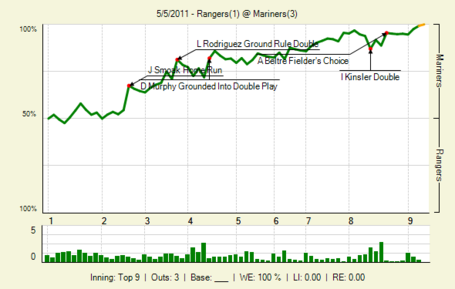 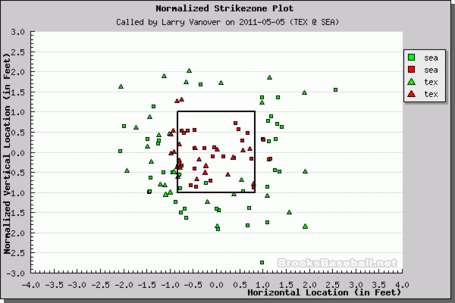