I did not get to watch much of tonight's game, so there wasn't going to really be a recap, but what Wilson did tonight deserves some words.

Prior to tonight's game, FanGraphs' estimated Wilson's true-talent performance this season as having been worth 1.1 wins above a replacement-level baseball player. In the American League, that's good enough for seventh. Only two players with six or fewer starts had more WAR: Brandon McCarthy (1.3) and James Shields (1.2). So, even before tonight, he looked like one of the best pitchers period in the young 2011 season. At least according to one popular source.

The main ways for a pitcher to inflate his WAR are maximize strikeouts, minimize walks, keep the ball in the yard, and pitch a lot of innings. Wilson covered all of those bases and then some tonight. To the first, how does 12 strikeouts sound? If it sounds dominant, that's because it is, as are the nine swinging strikes he got.

He matched that with just one single walk, too, which continues an encouraging sign from Wilson. Last season, his biggest weakness was his walk rate, but prior to tonight he had already nearly halved his BB/9 so far through the season, and was getting the ball in the zone more often to back it up. Another night of few walks and 65% of his pitches thrown in the zone just reinforces the confidence that the nibbling is decreasing.

Of course, you can't do any better than no home runs allowed or a complete game. It was the Rangers' first complete game of the year, and it came just one night after yet another horrific bullpen melt down. What better way to keep the pen out of the game than pitch all nine innings? Going the distance and dominating a lineup that way (ON THE ROAD!) will certainly serve to increase his WAR when it updates Thursday morning, but more important it came when the Rangers had two emotionally demoralizing losses in a row to division opponents. The Mariners eked out some runs, but Wilson reminded the fans that there are very good players on this roster, and because of the C.J. Wilson's of Arlington, a slump is likely just a slump.

Mr. Wilson, please humbly accept my apologies. When you asked to start, I was convinced there was little way you would be even a mediocre starter. Instead, you were more like an All-Star and a top-of-the-rotation talent. After that, I was concerned you might struggle to repeat that performance. Instead, it looks like you've only improved.

You have proven me very, very wrong. And I love you for it. 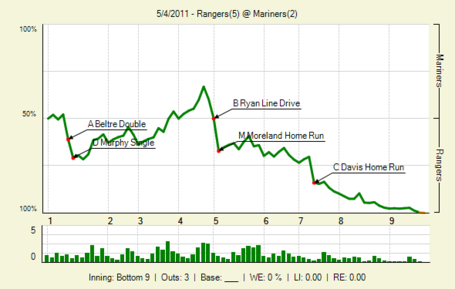