This Is Getting Bad

Share All sharing options for: This Is Getting Bad

The bullpen is awful right now. That doesn't mean it will be awful in June, let alone October, but over the recent stretch of the season, it has been bad enough to sink the Rangers who are otherwise okay-to-good. While the bullpen is just one cog on the team, and not even the most important cog, losing because of a bad bullpen is the worst way to lose. Things aren't any better if your starters are getting knocked around and the game is over early (in fact, they're probably worse), but it's much less painful to watch.

Darren Oliver, for the second straight day, served a meatball on his first pitch to give up the winning run. This was after Pedro Strop, in consecutive innings, gave up the lead. Either the Rangers' offense was off, or Erik Bedard was on, or Safeco was extra Safeco-ey today (or probably a combination of all three), and Alexi Ogando was once again lucky to only give up as many runs as he did, but all that was going to be enough until the Rangers' bullpen stepped in and ruined it.

Also, let me show you this. That's a chart showing you how many runs you can expect to score in a given situation. So, for instance, with an average hitter up with a runner on first and no outs, you can expect to get, on average, just under one run; 0.953 runs to be exact. Now, this is from 1999-2002, so that number might be lower today, but that's beside the coming point.

The Rangers found themselves in that very position in the 8th, except they didn't have an average hitter up. They had Ian Kinsler up, an above average hitter. The odds of scoring at least a run are very good, in fact, a quarter of the time, you can expect to score multiple runs with someone who isn't even as good as Kinsler up.

However, Ron Washington elected not to have Ian Kinsler hit in that situation. Instead, he chose to take the bat out of Kinsler's hands by having him bunt over Borbon, thus bringing up Elvis Andrus (who pinch hit) with a runner on second and one out. As you can see, the expectancy in that situation is .725 runs. You have lowered your expected runs, by choice. Plus, you have chosen to now have Andrus, a below average hitter, bat, so it's really even lower than .7 runs.

Now, sure, Borbon stole third (which was pretty exciting), and Andrus brought him in with another bunt, and the Rangers had the lead. It worked to get in a run. The Kinsler bunt, in fact, did raise the odds of scoring exactly one run, from just under 18% to 23%. But that's before considering the fact that you have given the base runner situation to a lesser hitter, and we saw the problem with playing for just one run immediately courtesy of Strop and Oliver. It is not a good idea to play for just one run, especially when you don't have a reliable bullpen.

Now, from a win probability standpoint, the Kinsler bunt only dropped the Rangers about 2%, from a 57% chance of winning to 55% chance of winning. Not a lot, and there is an argument for bunting now and then just to keep defenses honest. But it did drop, and that, again, ignores the fact that you dropped in quality of hitter quite a bit, and you don't have a bullpen you can really trust. This was not a decision that deserves a whole lot of screaming and yelling, but it was probably one that deserves questioning. And it was probably one that hurt the Rangers on a night they ended up losing for a nebulous potential gain.

Not to blame Wash for the loss entirely, of course. It was mostly Strop and his inability to be a good Major League closer yet, if he ever will. You'll notice below he has a -80% WPA.

-50% is costing your team an entire game. Think about that. 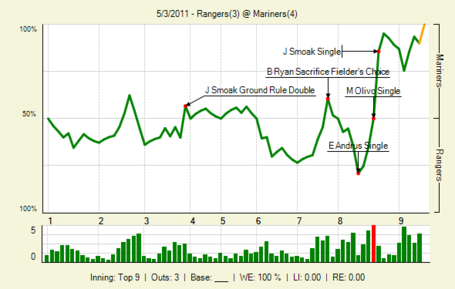 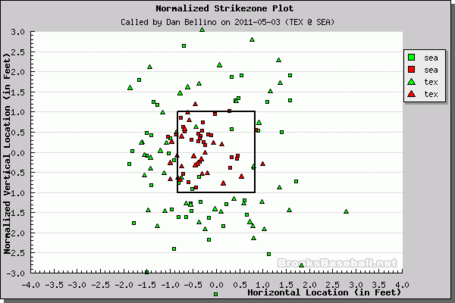