Share All sharing options for: Rangers Offense Bails Out Holland

Memorial Day Baseball 2011 started out looking good all around for the Texas Rangers. The bats came out strong against Wade Davis, scoring two runs early and loading the bases in the first inning for Mike Napoli. Napoli flew out to deep left field on a ball that like would have hit the stands in Arlington. It was simply a precursor of the game Napoli would have, though. With two on in the third, Napoli went opposite field -- this time not leaving it short, to make the score 5-0. Endy Chavez -- who remains remarkably hot -- homered as well, and Mitch Moreland launched a blast in the fourth that only failed to reach the stands because of a catwalk in the way. The home runs, coupled with a lot of solid Rangers contact and some awful Rays defense -- particularly thanks to Sean Rodriguez -- staked Texas to an effortless 8-0 lead before four innings were even in the books.

On the other side, Derek Holland started out solid. Through five and two-thirds innings, he struck out seven, was flashing tremendous stuff, and generally not getting hit hard. He was, as usual, struggling with efficiency, as well as delivering a few too many walks, and giving up quite a few fly balls. There were signs it wasn't as great a start as the runs allowed made it look, but, still, through the first five innings at least a couple of his walks looked like they may have come thanks to a C.B. Bucknor strikezone, and his only run allowed came thanks to a poor throw on a steal attempt followed by a Past A Diving Michael Young™. Napoli added another homerun in the sixth to get the run back, and at 9-1, there was no need for angst.

Then came the sixth, and everything fell apart for Derek Holland. Trying too hard to avoid walking Ben Zobrist, he allowed a home run to make it 9-2. He still managed to get two outs with just one on, and it was still looking okay, but the control hit rock bottom as he walked Kelly Shoppach -- he of the 6% walk rate -- to set up Justin Ruggiano. Riggiano's first career homerun made the game 9-5.

Mark Lowe came in to replace Holland, and was greeted by an infield single by Evan Longoria, which was followed by a walk to Johnny Damon, and then another infield single by Rodriguez. Technically another infield single, because what actually happened was Young -- playing second base for the day -- tripped up Elvis Andrus after Andrus managed to reach the ball behind second base. Suddenly, without even giving up a fly ball or line drive, Lowe was facing the tying run in a game which had just been 9-1 minutes before. Out of nowhere, Rangers fans had a reason to panic.

Except, the Rays' win expectancy was still at just 11.1%. B.J. Upton started the inning with a strikeout, and Lowe got him to end it on a strikeout. A 4-0 lead with 10 outs to go is pretty huge, even if it came thanks to a collapse. The inning, and the Rays' offense, came to an end, and Mike Napoli put it even further out of reach in the eighth with a double off the top of the left field wall, scoring Nelson Cruz. Combined with his deep fly, Napoli ended the day just shy of a record-tying four home runs, two of which actually made it there, one of which turned in to a double. Chavez followed with a two-run single, and just like that the Rangers were up 11-5. In the end, the only damage done in the game was Derek Holland turning a quality start in to a bad one. The offense made sure that never mattered.

The Rays are not the AL East champion-caliber squad they were last season, but they've been a good team so far in 2011, playing roughly about as well as the Rangers. Going in to their house and winning a game is nothing to take for granted, let alone doing so by six runs, and ensuring nothing worse than a 1-2 series loss -- which would be nothing to stress out over, itself.

Darren Oliver also added to the good signs, pitching two shutout innings with three strikeouts and no walks. That drops his ERA down to 2.70 -- second on the Rangers only to newly-promoted Yoshi Tateyama. His peripherals suggest a little luck, but they also suggest one of the better relievers so far in 2011. There has been a lot of angst over the bullpen this year, and it's been justified, but Oliver has been more than solid, and was certainly everything you could hope for tonight.

A good bullpen performance, and 20 hits from a dominant offense, means a good game and a tremendous start to the series. Only we Derek Holland fans have anything to feel upset about. 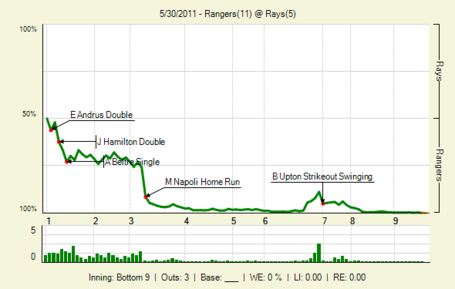