No Words (The Good Way)

Share All sharing options for: No Words (The Good Way)

How does one begin recapping Sunday's Rangers game? It's one of those times in life where you tell people "you just had to have been there."

I was working on this post while trying to put aside anger and depression. It was heavy on stuff about how broken Neftali Feliz looks, about how much Josh Hamilton hurt the Rangers, about how ridiculous umpires can be, about how quickly fans can crash from big moments, and about how rarely you feel so miserable after your team outscores their opponents by seven runs in a series.

I even had a graphic depiction of the game: 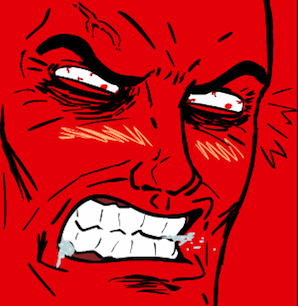 Instead, something completely different happened. . .

WPA is not meant as a measure of skill, but simply a measure of how the odds of a game change moment to moment, and which players create that change. It has been called something of a fan emotion meter, and rarely is that more true than today, with the violent swings in win probability you see on the chart at the bottom. This game felt exactly like that chart looks, with the Rangers steadily looking good early, a sudden, hopeless crash, an amazing late turn immediately followed by yet another crash, and then an improbable, vicious shift at the very end.

Things started with Alexi Ogando cruising and the Rangers offense getting a couple early runs. It all fell apart in fourth when the Royals managed to score five runs off of Ogando (according to the rule of Earned Runs, more on that later). Mike Napoli -- who opened the scoring with a double -- homered in the fifth to make it 5-3, but the Rangers proceeded to use up their outs and make a comeback less and less likely, until they hand only four left.

The amazing late turn came courtesy of Michael Young, who came up with a runner on after Josh Hamilton fell to 0-4. With the Royals leading 5-3, Young swing on a 3-0 count for just the third time in his career, and it resulted in a game tying three run home run and an incredible 39% shift in win probability. Just like that, a game that had seemed depressing and hopeless looked okay. The Face of the Franchise had seemingly given the Rangers a chance, and emotions were high.

Except, then came Neftali Feliz, who has been the Human Buzzkill lately. He was greeted by a triple to start things off, and all it took to seemingly erase Young's home run was a deep fly ball. That came, and in just a matter of minutes the game looked awful all over again. Arthur Rhodes had to come in and end the inning, and the Rangers were forced to come back against Joakim Soria. The game wasn't over, but considering how the Rangers had gotten to this point -- and how rare comebacks seem to be in 2011 -- it sure felt over.

Soria began the inning by just missing Nelson Cruz's chin. That may have been a bad call, as Cruz responded angrily with a game-tying shot to the left field stands, a 43% hike in win expectancy. It was the Young home run all over again, with another late surge in the Rangers favor. For eight and a half innings, it has been an emotional game, the kind you find thrilling when your team isn't involved.

The ending, though, was not something thrilling in the normal sense, instead, it was more hilarious, allowing things to run the full gamut of emotions. Napoli added his third hit -- this time a single -- to follow up Cruz's shot. Inspiring. Mitch Moreland struck out, and David Murphy then worked a full count and was called out on a "strike," and there were two outs. Aggravating. Finally, Elvis Andrus singled just past the glove of Eric Hosmer, and the winning run was headed to scoring position. Exciting.

. . . except Dave Anderson waved Mike Napoli home. Shocking. The throw by Mitch Maier beat Napoli to the plate with plenty of room to spare. Depressing.

And Napoli was safe. Because he slid under the tag. Mike Napoli scored the game-winning run from first on a single because Brayan Pena forgot to tag him!

Everything happened in this game. The best and worst moments of baseball were all encapsulated in one of the most unbelievable and strange games I have ever seen in more than a decade of watching baseball, and, most importantly of all, the final emotion was elation. At multiple points it looked like this would be a series where the Rangers outplayed their opponents, but lost, anyway, so it didn't matter. Instead, they got the series victory they deserved and the angst is marginalized just to the players who showed troubling signs.

It's a game with so much to talk about, but no easy way to organize them. Instead, the last-minute-alteration of the graphic representation: 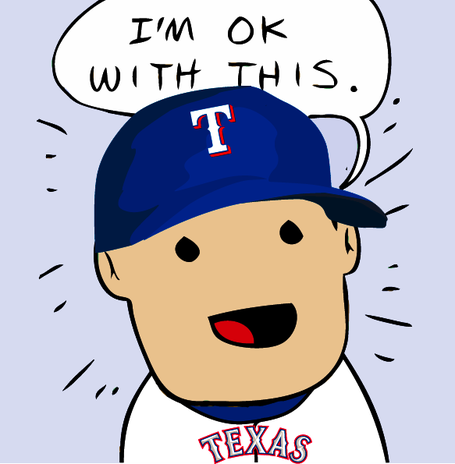 A few other bullet point-style thoughts on the game: 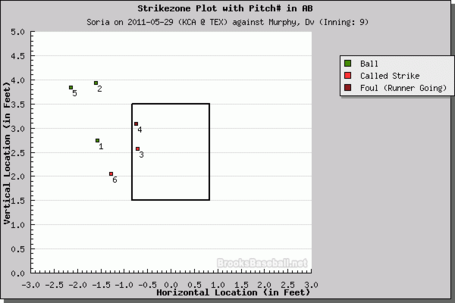 Okay, enough on the negatives from that game. The results were awesome and incredible and happy and hilarious. The Rangers got a series win and, overall, played well. These are good and happy things, and the only reason to dwell on how close it was to being sad is so you can feel that much better that it didn't. 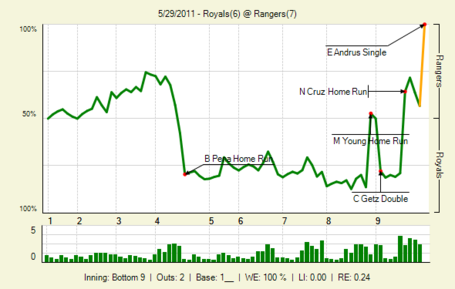