Share All sharing options for: Rangers Pile On O'Sullivan

I wish every day could be Vs. O'Sullivan Day!

To help us get over last night's misery, the Ranger bats broke out in a big, big way. It started when Adrian Beltre doubled in Ian Kinsler and Michael Young to give the Rangers a 2-0 lead in the first. Then it peaked in the second, when Mitch Moreland, Mike Napoli, and Endy Chavez combined for back-to-back-to-back home runs, and Texas never looked back.

Chavez's blast was perhaps the highlight of the game, capping off the run of blasts by going in to the upper deck; a mammoth blast from anyone, let alone a utility outfielder not known for his power. It was his first home run since 31 May, 2009, as a Mariner. Chavez added another hit later to make the choice of playing his glove, rather than David Murphy's, in center look like a good one. It's been a small sample, but since being called up this season, Chavez has put up an impressive .991 OPS, at least providing some hope there might be a worthy centerfielder on the roster while Julio Borbon is out.

Chavez was not alone with the offensive exploits, though, as ten runs suggests. With the game seemingly over, Ned Yost opted to let starter Sean O'Sullivan stay in the game, rather than use up his bullpen for a lost cause. Every Rangers starter but Michael Young (who still reached with a walk) responded with a hit, and each of the 5-9 hitters had a home run. Nelson Cruz was particularly inspiring, putting up three hits, with a double to go with his home run, and playing some fantastic defense in right field. Cruz has struggled this season, both before and since his DL stint, but for tonight at least he confirmed he can still swing it.

On the other end was Matt Harrison, who was none too efficient and struggled to miss bats, but also managed to avoid walks or melt downs. The Royals were never able to hit Harrison hard, and though he only managed six innings, he was good enough to win today.

The fun part was Harrison's replacement, Yoshinori Tateyama, who allowed the first (and only) Royals run of the game, but looked good, with a strikeout, three swinging strikes, and two perfect innings after his first to put the game away. Every day someone comes in from the bullpen and looks good, it gives us a little hope the the most troubling aspect of the 2011 Rangers might be correcting itself. A little bit more of this from Yoshi would go a long way.

I don't expect anyone to be over Friday night's (or Saturday morning's?) horrific loss, but a nine run victory where just about every part of the Rangers looks good has to help. At the very least, it was cathartic. 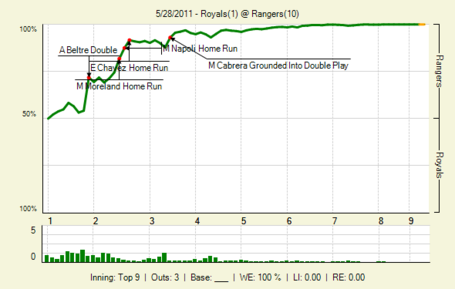