(Author's Note: The following words may be overly skewed by emotion.)

If you didn't watch Friday Night's Rangers game, you're a lucky person.

Colby Lewis could not get outs, and gave up six runs in the first two innings. He wasn't helped out by David Murphy, who cannot handle centerfield (-33.5 UZR/150, by the way), and let a ball sail over his had early in the inning, and then failed to handle a shallow fly that most centerfielders would get to shortly after.

Murphy helped make up for it, though, by hitting a two-run homerun in the first. Despite the awful start by Lewis and the awful defense, the Rangers still managed to lead by a run after the first two frames.

The problem was, that was where the scoring ended.

The Rangers kept the Royals off the board, too, until Neftali Feliz came in for the save, and once again asserted that he is not right. He finally managed to find the strikezone consistently, but found too much of it against Alex Gordon, who took him (very) deep to tie the game. Ron Washington left Feliz in for another inning, though, and something strange happened: he started throwing breaking balls. In the 10th, Feliz through five sliders, and managed to make easy work of the Royals, including his first strikeout of a right handed hitter all season. It was perhaps encouraging, since it was the first time he's really looked good since he went on the disabled list, but it was none the less maddening that he has refused to do this earlier in favor of throwing all fastballs and living outside of the strikezone.

The Rangers managed to load the bases in the ninth, but Nelson Cruz struck out for the final out, and the game went in to extras. Both teams kept the opposing offenses off the board the rest of the way, until Dave Bush came in to the 14th and allowed five runs on three home runs, and that was that. It might just mark the end of his current tenure in Arlington.

On the Cruz, by the way, his Win Probability Added looks bad because of that moment, and because of an oh-fer, but he had a long fly ball in the 11th knocked down by the wind just shy of ending the game on a walk off. Less outrageous weather, and we're sitting here cheering about his wonderful moonshot instead of his inability to come through.

By that point, the Rangers had allowed Craig Gentry to bat with the winning run on base, even though Mike Napoli was available and a lefty was pitching. I have no clue why Washington made that call. Clearly, Endy Chavez was available, as he later pinch ran for Mitch Moreland (thus taking Moreland's bat out of the game), so Gentry could be taken out for the much better hitter. In the 10th, Washington had Torrealba bat -- again against a lefty -- even though Napoli, again, was available. Napoli eventually did come in to the game, though: as a defensive replacement after Moreland was pulled for Endy Chavez.

So, instead of use a man who for his career and this season has destroyed left handed pitching when he represented a chance to end the game, Ron Washing elected to have lesser hitters bat, even though he was eventually willing to put Napoli in the game, anyway. I cannot even fathom how it makes sense. Who knows if it would have actually resulted in a Rangers win, but you play the odds so you can find out, and, for whatever reason, Washington didn't play those odds tonight. He had Torrealba and Gentry hit so that Chavez could be used as a pinch runner for Moreland and Napoli could replace them.

So we had questionable managerial decisions, a bullpen meltdown when the Rangers were just two outs from winning, and rather than the offense cancelling out a strong pitching performance it was the other way around. Not to excuse the offense, because going 12 straight innings against the Royals in Arlington without scoring a run is absurd. There was even more bad umpiring, such as the Rangers having a double play denied by the second base umpire -- which was not corrected because baseball is mysteriously allergic to replay -- and some bad strike calls, all of which Tom Grieve continues to excuse as though they are a necessary and understandable part of the game. Which only makes it worse.

Meanwhile, Minnesota blew a 5-0 lead over the Angels, and the Rangers are back to a tie in first. Because of yet another game that was maddening on almost every front. This was one of those games where you wonder why you even follow baseball when it can do this to you, and yet most of us will be back tomorrow.

"Thank you sir, may I have another?" 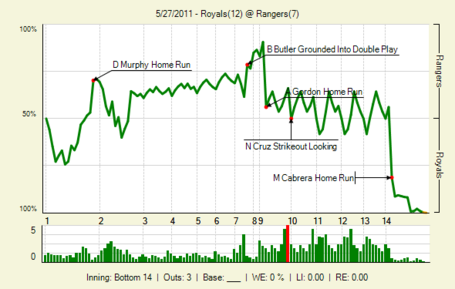 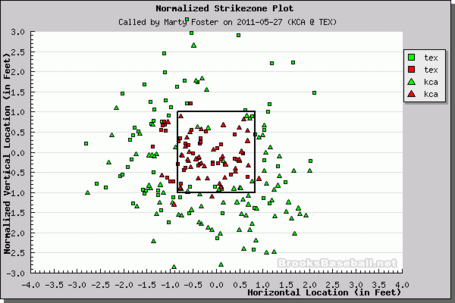