Hamilton And Cruz Return In Style

Share All sharing options for: Hamilton And Cruz Return In Style

We really missed you!

Everything you need to know about tonight came on two swings of the bat. Josh Hamilton didn't hit a single homerun prior to his long trip to the Disabled List, but it only took two pitches for the reigning MVP to announce his return, pulling a John Danks pitch just over the right field wall for a solo shot.

It was, perhaps, the highlight of the Rangers' season so far. After such a great start, there has been so much frustration and mediocrity, with just the hope that the return of the team's best player would help turn things around. In no time flat, he gave the team the lead en route to an easy victory.

Cruz took a little more time, beginning his return with a ground out and a strike out, but, with two outs in the sixth, he followed an Adrian Beltre walk with a mammoth blast to left field, giving the Rangers a 3-0 lead. Two innings later, Hamilton added a second hit -- a double -- and scored on a David Murphy sac fly to make it 4-0. That's a nice, easy, four run victory with every run coming thanks in part to perhaps the two best players on the team, both sorely lacking from the line-up for much of the season.

Of course, it's hard to have a zero in the score without some good pitching, and good pitching is what the Rangers got -- again -- from Alexi Ogando. Six strikeouts to three walks is solid enough, but the best part was nearly two thirds of his pitches finding the zone. Coupled with stuff that was good enough to get 14 swinging strikes -- against one of the hardest teams to make fan in baseball -- he was the model of efficiency. The White Sox offense helped him get a shutout, but he was more than willing to take advantage of it and keep the bullpen out of the game. And every Rangers fan right now can appreciate keeping the bullpen out of the game.

So, a complete game shutout from the guy who wasn't supposed to be a starter before the year began, and huge offensive contributions from long lost All-Stars. That's an awesome game. There were some other great moments, like three Michael Young hits, a great throw by David Murphy from deep centerfield to nail Paul Konerko going to second, some reassuring defense from Cruz, and Hawk Harrelson no doubt sitting silent in the booth at some point, but this game was made by Cruz and Hamilton, with a wonderful supporting performance (good enough to usually headline) by Ogando.

You would have to stretch reality a tad to expect a more uplifting game from the Rangers. For tonight, they look like they might just be world beaters again with their stars back in action. 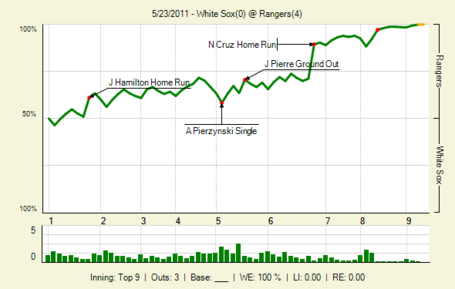