Phillies Do What Rangers Do

Share All sharing options for: Phillies Do What Rangers Do

Sunday's Rangers-Phillies game was just like all the other games in the series. There were some questionable calls, and some quality pitching combined with inept offense for an extremely low-scoring game. The score was even exactly the same as Saturday!

The only difference was, this time, the Rangers were the team that produced just enough.

Harrison was not exactly his best, today. He only managed three strikeouts (two on Ryan Howard), exactly as many as he walked, and was a bit below average at finding the plate. The zone was a tad tight, but not to any degree you can't (sadly) expect, and was probably better than it has been so far in the series. Only six batters whiffed on anything he threw. That's quality start stuff, perhaps, but not shutout stuff without some serious help.

Fortunately, the Phillies (and perhaps the baseball gods) were more than willing to help. The Phillies gladly swung away at Harrison, and got the ball in the air plenty, but couldn't do a thing with it when they did. A quarter of their fly balls never even left the infield, and when they did manage to hit something square, they couldn't do anything with it. Philadelphia had no extra base hits, and never even managed to string together multiple hits in an inning. Thanks to all that, even without being particularly adept at throwing strikes or missing bats, Harrison was able to see the ninth inning, finishing just two outs shy of a complete game shutout. It was exactly what Rangers fans have had to watch recently, where a pitcher is doing fine, and the offense is making it worse with ineptitude. For once, Texas got the benefit of it.

While Harrison was just good enough with the help of the Phillies offense, the Rangers were just good enough with the help of Roy Oswalt. Oswalt did a better job of finding the zone, but was not really any better at missing bats. Unlike the Phillies, the Rangers were able to capitalize, with every position player but Ian Kinsler and Mike Napoli getting a hit, Harrison himself just missing on one thanks to a brilliant play by Jimmy Rollins. They were only able to group those hits together for a run in the sixth when Mitch Moreland followed a Michael Young single with a double, but that was all it took. Craig Gentry later bunted in a run for insurance, but in the end it was meaningless. Neftali Feliz only took ten pitches to get the final two outs of the game, ending it on one more effortless Philadelphia pop-up.

There was also another incorrect call on the basepaths, this time Elvis Andrus, who had two hits, stealing second when he was actually tagged by Rollins. It's nice to be reminded that the Human Element will help your team out sometimes, too.

Going on the road to face an elite team and three of the best pitchers in recent baseball history, especially when you're struggling and injured, probably the best you can expect is to just avoid a sweep. That's what Texas did, and they had a legitimate shot at taking one of the other games to get a win. It was a frustrating series to watch, and amazingly low scoring -- the total score of 5-4 is usually the average score of a single baseball game -- but in the end, escaping with at least a win is okay. It kept the Rangers from falling below .500, and it keeps them in first place for at least one more day (longer if the scores in the Oakland and Anaheim games at the time of submission hold up).

With any luck, this will be the last series this year where the Rangers have to make due without Nelson Cruz and Josh Hamilton. It could have gone better, there are still things to worry about, but at least they tread water. 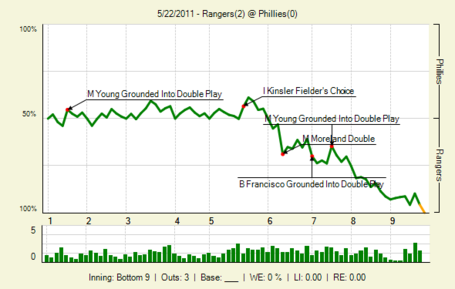 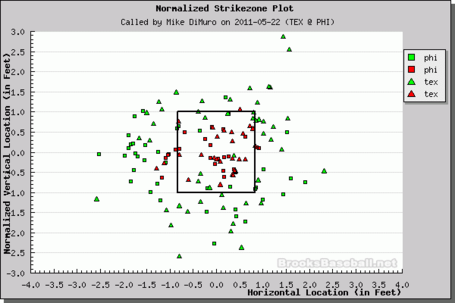