Share All sharing options for: Cliff Lee Serves A Reminder

There is nothing to talk about from tonight's game. It was simple and efficient. Cliff Lee reminded us all what we're missing, and, whether you were okay with the money it would have taken to keep him or not, it has to hurt. The Rangers offense helped with their own contributions of ineptitude, but they were shut out because Cliff Lee is awesome.

Colby Lewis is not so bad. While he was not as dominant as C.J. Wilson the night before, the results were better, with just two runs allowed. Just like Wilson (and Alexi Ogando before that), it wasn't enough thanks to the complete and total lack of offense. 12 hits, 18 baserunners and five runs have been enough for the Phillies to win the first two game of the series, and -- even with Lee and Halladay -- that shouldn't be the case.

Still, Lee and Halladay make it more likely, and they made it pretty unlikely the Rangers would win this series. If they can squeeze out a win Sunday, you should still feel okay with the series. Barely.

Maybe this will make you feel a little bit better. Maybe.

As for today's "why does Baseball do these things?" note, today's Rangers game was the nationally televised game. However, if you live in Washington, for some reason, they showed you the A's/Giants game. Even if you pay handsomely for their MLB.tv and/or Extra Innings packages, you couldn't watch the game, because it was important to them you watch A's/Giants. That makes it awfully hard to watch and talk about the game (without doing something illegal). Does it make sense for MLB to want their fans to not be able to watch the games, even when they want to pay money to do so? Maybe, but someone will have to explain how. 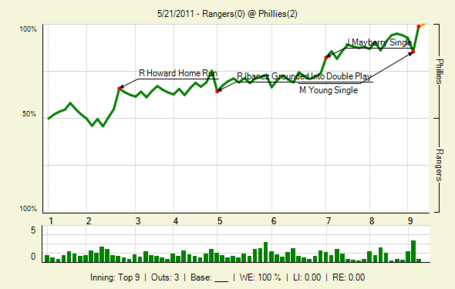 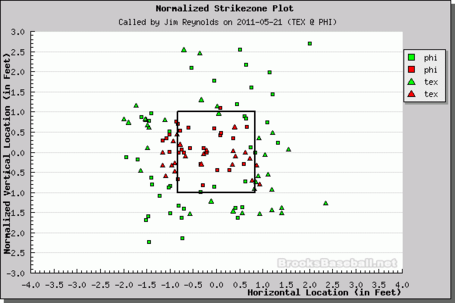