When your pitcher throws eight shutout innings, you expect to win the baseball game.

Derek Holland battled a sketchy strikezone (courtesy of the same Mike Muchlinski who may have cost the Rangers earlier in the year on an incorrect check swing call), and some awful defense to deliver five strikeouts and only one walk, and then handed the ball over to Neftali Feliz in the ninth.

Unfortunately, the offense was never able to plate anyone outside of Chris Davis's solo home run, and when Feliz came in, he had only a one run lead to work with. It's getting tiresome to point out, but Feliz just has not been a good enough pitcher to be a closer since he returned from injury. Tonight he did a better job of finding the strikezone than he has been (18 out of 32 pitches), but it was still not very good, he walked one more hitter, and couldn't get a single strikeout.

Still, the Rangers were just an out from taking the game when Feliz faced Mike Aviles. Aviles was able to work a full count, and Feliz could not put him away, giving up five straight foul balls before Aviles singled in the tying run. A brilliant play by Elvis Andrus kept it from ending the game, but Feliz had blown another save. The Rangers held on long enough to lose in extras, thanks to more startling Washington/Maddux faith shown in Cody Eppley.

So, to recap, more questionable umpiring. A good pitching performance by one of the most promising young pitchers the Rangers can offer wasted by a poor offensive outing and bad defense. A game -- and series -- blown one out from victory thanks to an increasingly-troubling closer. Oh, and if you check the boxscore, you'll notice Andres Blanco played right field. Because Endy Chavez became the latest Ranger to get hurt, and Michael Young apparently couldn't play on an off day.

So, yes, this game was a horrible experience. But at least it's over. 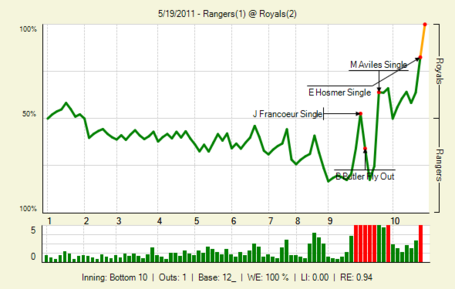 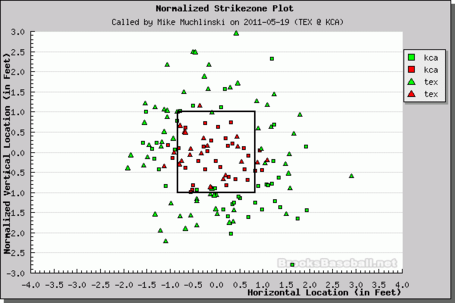