Share All sharing options for: Rangers Comeback To Beat Royals

Rangers! Come back! It happened!

Tonight was yet another stressful, often-frustrating game. Alexi Ogando battled with a bit of wildness in the second and allowed two runs before he settled down for a very solid start. The Rangers scored runs in the third and second to tie it, before Elvis Andrus hit a pinch-hit single in the 9th to score Craig Gentry, giving the Rangers a 3-2 lead.

That didn't end up being enough thanks to Eric Hosmer and more struggles from Neftali Feliz. Ever since returning from his injury, Feliz has struggled with finding the strikezone and missing bats, and that continued tonight. Hosmer greeted him immediately with a game-tying home run -- Feliz's first blown save of the year -- before he walked Jeff Francoeur and Billy Butler. That worked out as both were pinch run for and Feliz picked off both of them, which is pretty cool, and then struck out Wilson Betemit, but he returned for the 10th inning and allowed runners to reach first and third before being yanked.

Feliz is getting pretty worrisome. Barely more than half of his pitches, once again, fond the strikezone, and he had two balls to one strikeout. His previous rust has come in games where no damage was done, but tonight it cost the Rangers a win in regulation, and nearly cost them a win period. Thankfully (and luckily) it didn't, and Arthur Rhodes was able to clean up Feliz's mess to give the Rangers another chance.

The story of this game was nearly how the Rangers failed to capitalize on opportunities (a rookie pitcher struggling to throw strikes, runners on first and third with no outs in the 10th leading to no runs), and the Feliz meltdown leading to another frustrating loss. For once, the story ended up being the Rangers getting out of jams (or the Royals failing to capitalize) and scoring key runs late.

The same story that helped cost the Rangers Tuesday, though -- the walk -- reared its ugly head once again today. After an Endy Chavez walk to lead off the 11th, Ron Washington elected to have Elvis Andrus bunt. Thing is, even a successful bunt hurts the Rangers' odds of winning there. You bunt when you want to play for one run, but in the top of a decisive inning (especially with a sketchy bullpen), why play for just one? But regardless of that, bunting there made scoring one run even harder. Look here, (h/t ab03 of Lone Star Ball), and you'll see a runner on first with no outs scores at least a run 41.6% of the time in the current AL run environment (4.3 R/G). With a runner on second and one out, it's only 38.9% of the time. Elvis Andrus has been a solid hitter so far in 2011. He had the go-ahead RBI earlier in the game. He's not a guy whose batting rights need to be taken away in that situation. In the Win Expectancy graph below, you'll see the Royals getting a slight gain on their chances of winning in the 11th; that's the bunt.

It made no sense, but it worked out. Ian Kinsler walked. Chris Davis, in for Michael Young, walked. Then Adrian Beltre singled in two runs to give the Rangers the lead and insurance. It didn't justify the bunt, but it helped make up for it. Though the Royals did score an insurance run off of an otherwise awesome Mark Lowe (two strikeouts and some serious heat) to help reinforce why you don't play for a just a run when you're not in a walk-off situation. . .

So, frustrating game, hard game at times to watch, but the Rangers pulled it out. Thanks in part to some nifty defense, like a jumping catch by David Murphy and a diving stop in the 11th by Ian Kinsler (who also had a nifty slide for the winning run). For the fourth straight series, they won't be losing. They've now taken five of their last seven -- with the 7-0 pretend game not included -- and will have two of the best players in the American League returning shortly. They pulled out a game where their odds of winning were at one point about as bad as one-in-six. They may be treading water just enough to make things okay. 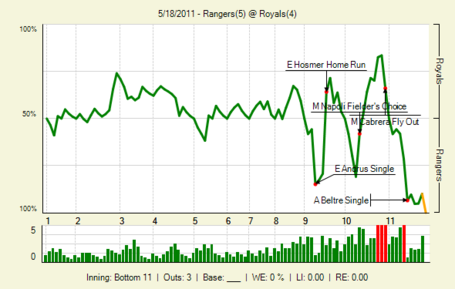 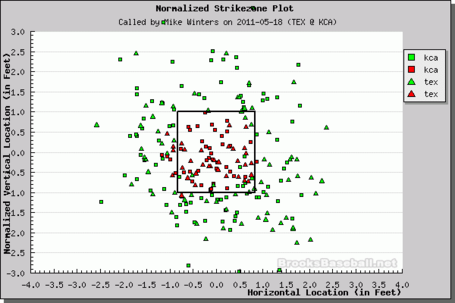