Rangers Bunt Their Way To Loss

Share All sharing options for: Rangers Bunt Their Way To Loss

John Danks was off today. Fewer than 58% of his pitches managed to find the strike zone, and he issued six walks. He was more than willing to hand out free passes, hitters counts, and high pitch totals to help kick him out of the game early.

The Rangers responded by bunting. Three times the Rangers attempted to bunt off of Danks, and while it once resulted in a single, it twice resulted in fly outs, once in a double play. The bunt is rarely a better strategy than allowing a Major League-caliber hitter to try and advance base runners without giving the opponents an out. Against a pitcher who is having trouble finding the strikezone, it just lets them off the hook. John Danks today was not pitching like a Quality Start starter, but despite taking 72 pitches just to get through innings, and despite all the walks and the hittable stuff he displayed, he managed to have one. Because the Rangers could not fore go a small ball strategy that would have been a questionable call most nights, and an insane one tonight.

That contributed largely to a 3-0 lead turning in to a loss. What also contributed was Matt Harrison having nearly as much trouble putting his pitches in the strikezone as Danks. Despite having great stuff, like a fastball that touched 98 miles per hour tonight, Harrison thinks he has to nibble, and it leads to infuriating nights like tonight. The poor control resulted in walks to Carlos Quentin and Alex Rios in the fifth, and his response was to throw a fastball almost exactly down the middle of the plate to Brent Morel. Morel's response was to hit it in the stands to tie the game. That is what makes Harrison frustrating, his nibbling, his eventual over-compensation, and his waste of "stuff." He didn't have a terrible start tonight, but he had an infuriating start to watch because it was so very Matt Harrison.

Texas continually let Danks off the hook with a lack of discipline and silly bunts and never got to score again. Meanwhile, they sent in Cody Eppley to try and protect a tied game in the eighth. Eppley -- both by ERA and peripherals -- has not been anywhere close to the best pitcher in the Rangers' bullpen this year, except by the most strict of peripheral measures (xFIP). Even there, Darren Oliver has been comfortably better. If you don't save Eppley from his home run rate, he's been pretty bad compared to a pretty bad pen.

On top of that, Oliver and Arthur Rhodes have not only been better at run prevention this season, but they have recent track records of being very good relievers, instead of recent track records of being untested minor league pitchers. Is that really worth playing the platoon splits? Even if it is, Mark Lowe has been more effective than Eppley in his career and 2011. Or, heck, Dave Bush has been remarkably solid out of the pen, and was once a passable MLB starter. He's really less likely to get three outs than Cody Eppley, or you just have to save him for long relief even though you have Brett Tomko and don't know what will happen tomorrow, anyway?

Or, how about Neftali Feliz? I guess his role isn't to come in to high-leverage situations.

In any case, the Rangers went with Cody Eppley, despite (on paper) better and more proven options sitting there. Eppley issued two walks, allowed a single, and threw a wild pitch that brought the winning run home. That was that.

A split is okay, but once the Angels-A's game ends, the Rangers will be back to second place. If Matt Harrison would throw strikes, or the Rangers would actually allow their hitters to hit, or not bring in perhaps the most questionable relief option in the biggest moments, they might have been able to stay in first. 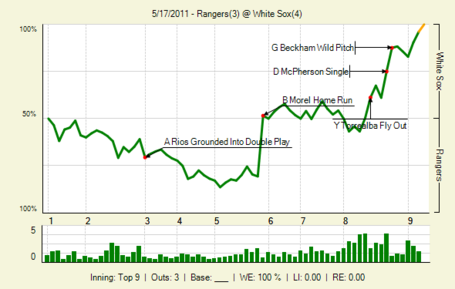 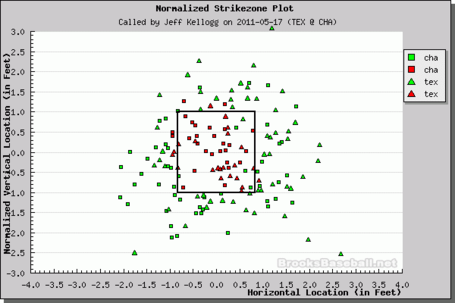