Perhaps the hand wringing over Colby Lewis may finally be ready to subside.

A line-up that included Endy Chavez, Chris Davis, and Craig Gentry did just fine thanks to four runs on 12 hits -- three by Chavez himself -- and four walks, with only Davis failing to reach base in the game. Four runs on the road with that quality of hitter is perhaps a little better than you can expect, but it worked out, anyway.

All the same, Colby Lewis made sure it didn't have to.

Put simply, Colbyashi had the first complete game shutout of his career, and the first for the Rangers this season. He was marvelously efficient, with more than two strikes thrown for every ball, and making it through the game on 110 pitches. He had seven strikeouts and just one walk. Of the five scattered hits off of him, only one -- a ninth inning Alexei Ramirez double -- went for extra bases, and almost nothing was well hit. He has had better strikeout performance in his past, but at no point in this game did it feel like Colby Lewis was touchable.

Lewis did struggle again with getting his fastball velocity up in the early innings, though he was again able to top 90 late in the game, and failed to miss any bats with his fastball. He coupled that fastball, though, with a change-up that garnered three whiffs, and a brutal slider that got White Sox to miss more than a fourth of the times it was thrown. That's a total whiff rate better than 9% against a team whose 7.5% rate ranks as one of the best in baseball, all without his fastball averaging 90 miles per hour. You would love for his velocity to be back to its average from last season, but if he can work around it to still be effective, and still find the velocity when he needs it late in games, it's not impossible to believe he can still be a good pitcher. This is now one of a growing handful of games he's done just that this season, and tonight he was dominant with it.

It is very, very nice to have an easy game where the bullpen doesn't show up and almost everyone on the team is on. Tonight was a much better showing than even 4-0 says, and it was fully welcome.

Texas has now won four of its last five -- not including going up 7-0 on Oakland and having it wiped away -- have secured at least a split for their third straight series, and find themselves, for the moment, tied for first place. Maybe things are looking up again. 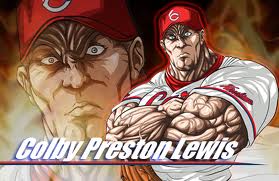 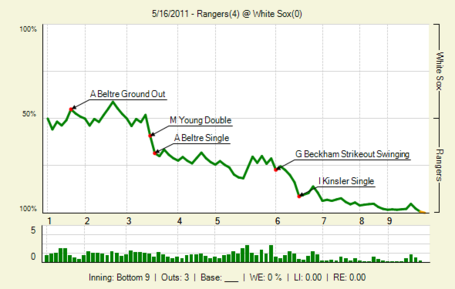