Rangers Do What Rangers Don't

Share All sharing options for: Rangers Do What Rangers Don't

The Texas Rangers won a series! They played three games against the same opponent in a row and won more of them than they lost! It actually happened!

It was not without some stress, though, as C.J. Wilson was off today. He took 104 pitches to get through just five innings, allowing two runs -- one on a home run -- and four walks to just two strikeouts. Thanks to a three-run Adrian Beltre home run, he started the fifth inning with a 4-2 lead, but allowed two singles to start the inning before being replaced by Brett Tomko. A Beltre error and soft Erick Aybar single later and the game was tied.

But while C.J. struggled, the bullpen, for once, did its job. Tomko gave up the lead, but the runners were inherited, and would likely never have scored without Beltre misplaying a Jeff Mathis bunt, and the base hit by Aybar was not hit very hard at all. All told, Tomko allowed just two hits and two walks against three strikeouts in two and two thirds innings, with the only runs coming on base runners put on by Wilson. He was replaced by Mark Lowe who used one pitch to get out of a first-and-second jam, and Neftali Feliz pitched a scoreless ninth, meaning four shut-out innings from the bullpen. They weren't dominant, but they didn't melt down, either.

That said, Feliz is getting a tad worrisome. He didn't allow a run, but he issued a walk to start the inning, hit the zone with just barely half of his pitches, failed to approach 97 miles per hour on his fastball, and was mostly sitting in the low 90s when he came in to the game. The velocity went up, he managed a couple swinging strikes, and ended the game with an exciting strike-em-out-throw-em-out, but this continued a disturbing trend since he returned from the disabled list. In his three games since returning, he's managed to miss the zone on 43% of his pitches, hovering right around 50/50 in all but Friday's game. In that time, he's issued four walks with today being his first strikeout since his return. His velocity has been right around where it was prior to the DL trip (though still nearly two miles per hour down on the fastball from 201), but he has struggled mightily with putting his stuff in the strike zone. Couple that with apparently not being available to pitch Saturday after only 18 pitches thrown Friday, and you have reason to be concerned that Feliz is still not right, adding one more reason to worry about the bullpen.

Fortunately, it hasn't yet cost the Rangers, including tonight. Beltre's home run coupled with a home run and a bases-loaded single by Chris Davis were enough offense, and the Rangers finally won a series. And, they did it against the division leader -- thus climbing a game in the standings -- in a series that featured two of the very best pitchers in baseball. The line-up is still missing important pieces, the rotation is dealing with slumps, and the bullpen is a concern, but for three days the Rangers managed to limit the damage done during this stretch of slumps and injuries.

For the first time in a while there isn't anything to scream about after a series.

On a side note: Thank you, Phil Cuzzi, for having a damn good strikezone tonight. 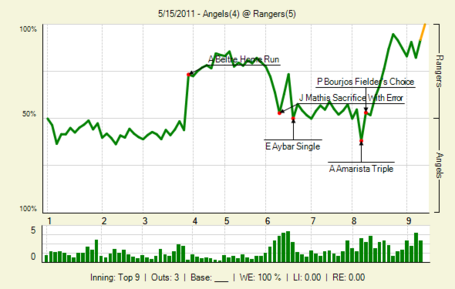 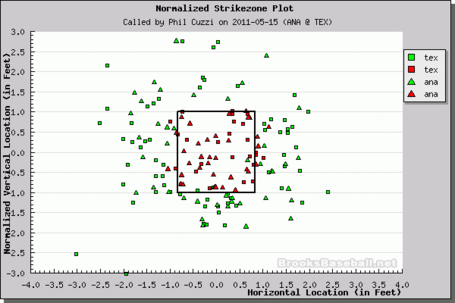