Share All sharing options for: Rangers Drop Close One

According to FanGraphs, the highest leverage moment in the Rangers' loss to the Angels today came in the top of the ninth. Maicer Iztruis came to the plate in a tied game with two outs and runners on first and second, a situation four and a half times more untactful than the typical plate appearance.

That situation was set up by the outcome of the second high leverage moment in the previous plate appearance, when Bobby Abreu worked a walk to put two on. Izturis came through with a single to left, and Jeff Mathis -- quite possibly the worst hitting every day player in baseball, who opened the inning with a double -- scored the winning run.

These two PAs shaped the game, and yet, somehow, the Rangers' best reliever did not appear in either of them. All the Rangers needed to do to have a chance to walk-off in the bottom of the ninth was hold the Angels to no runs in the ninth. The best way to keep a team from scoring runs is to use your best pitcher. The Rangers' best pitcher in the bullpen is Neftali Feliz. Thus, we can all agree that Neftali Feliz should be pitching the bottom of the top of the ninth of a tied game, right? Certainly at the very latest after Oliver has failed to keep a man with a 30 wRC+ (remember: 100 is average, lower is below) off of second.

Apparently we can't all agree, as Ron Washington and/or Mike Maddux went with Darren Oliver, and Darren Oliver lost the game. Why they would choose to give the Angels a better chance of winning I don't know, but they did. It had better be because Feliz was not available today instead of some sort of "roles" thing. Texas had a chance to win a series against the division leader by beating their top two starters, and chose to make it more difficult for no apparent reason whatsoever. (Note: It is being reported that Feliz was not available, which absolves Washington/Maddux, but doesn't make the game much less annoying.)

To be fair to Oliver, he actually struck out Abreu. Abreu clearly went around when Oliver had two strikes on him, but third base umpire Mike Muchlinski ruled it a check and the inning continued. If that pitch is correctly called a swing and a miss, the inning is over and the Rangers either win in the ninth or the game is still going. Just one more fun example of how much better the un-aided human element in officiating makes baseball!

Still, he allowed a double to Jeff Mathis, he doesn't get off completely.

A split between Weaver and Haren is just fine, of course. Few teams can boast a better one-two at the top of their rotation, and winning just one of those games is gravy. Haren was on today and completely stifled the Rangers' offense with his unique brand of throwing balls in the strikezone. The offense managed six hits in just under eight innings off of him, but were not able to capitalize much on them.

On the flip side, Derek Holland had another fine start, doing all you can ask. He struggled to miss bats, getting just four strikeouts against three walks, and garnering only three swinging strikes all game. The inability to get whiffs posed specific problems when he struggled to put hitters away, driving up his pitch count, and greatly came in to play when the game was 1-1 in the sixth. After getting three strikes on Howie Kendrick with one out, Kendrick managed foul off four straight pitches before working a walk. Alberto Callaspo made Holland pay with a double to give the Angels' a two nothing lead.

Still, when your starter goes six innings and gives up just two runs, and the bullpen keeps the opponents off the board for another two, you can usually expect to win. Dan Haren makes that harder (and his sub-three ERA, FIP, and xFIP all suggest he might make it unlikely), but at home, holding the opponents to three runs at home should be enough. Today it wasn't because of two RBI doubles and some great defense by Alberto Callaspo, because the wrong pitcher was in at the wrong time, and because human eyes cannot officiate baseball accurately without some help.

Oh, and welcome back to the big leagues, Endy Chavez! In his Rangers debut, he led the offense in negative Win Probability Added!

I think most people would take starting this series off with a split, and the Rangers can still make it a win tomorrow, but that was one excruciating -- and infuriating -- way to lose. I don't believe in curses, but this season. . . 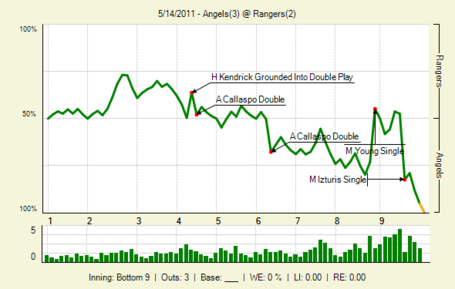 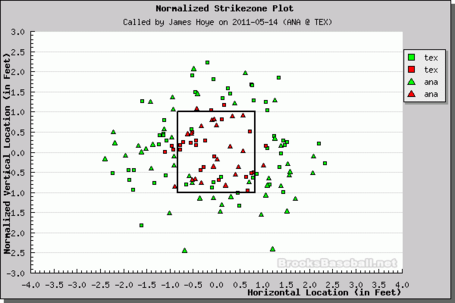