Rangers Move To Within Half A Game

Share All sharing options for: Rangers Move To Within Half A Game

After having Baseball literally pretend a 7-0 start to a game never happened, nothing would have sufficed short of an easy win over the Angels. Fortunately, that's mostly what happened tonight.

Alexi Ogando garnered 10 swinging strikes in his 99 pitches, five off of his breaking ball. His strand rates and Batting Average On Balls In Play are not going to stay as lucky as they have been if he stays in the rotation, but if he can keep missing bats (something he's been above average at this year, and was great at tonight), the strikeout rate will likely climb. If the strikeouts go up (and the home runs and walks don't), then when that LOB% and BABIP inevitably regress, the ERA could still stay well above solid, making him a very good -- and very surprising -- piece in the rotation.

Of course the Rangers have to be comfortable his arm to handle a starter's work load, but let's let them handle that. For now, Ogando held the Angels to one run (a solo shot by Erick Aybar) in six and a third innings with five strikeouts and one walk. He was in the zone, he was nasty, and he was awesome in possibly the most important game yet this season.

Speaking of awesome: Adrian Beltre! Another home run and another spectacular play from him tonight. A tremendous bare-handed throw helped Neftali Feliz, who struggled a bit, walking one, allowing a hit, and striking out no one on his way to a save. Cody Eppley and Darren Oliver got a little bit of redemption by throwing an inning and two thirds of perfect baseball.

The big positive was Elvis Andrus, who drove in two runs, including himself early on. As in a home run. As in he hit a ball in to the seats (well, almost) and went around the bases with no threat of someone tagging him out. Off one of the best pitchers in baseball. That's two more than last season's total of zero! Elvis Andrus: power hitter.

The big negative was Julio Borbon, who managed three strikeouts, and also managed to injure his hamstring and left the game. Endy Chavez was immediately pulled from his game in Round Rock as a precaution, which could mean the entire Rangers first string outfield would be on the disabled list at once. Just like a 7-0 start to a game getting stricken from the records, when things seem to be going right for the Rangers this year, the gods of baseball have to step in and put a stop to it. Borbon finally looked like he was on his way to being a solid outfielder this season, and while we don't know the extent of the injury yet, it's certainly worrisome.

But, the Rangers beat Jered Weaver and have a shot tomorrow to retake first place. Be happy tonight and check the injury reports tomorrow morning. 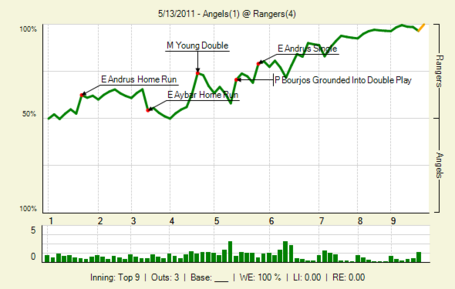 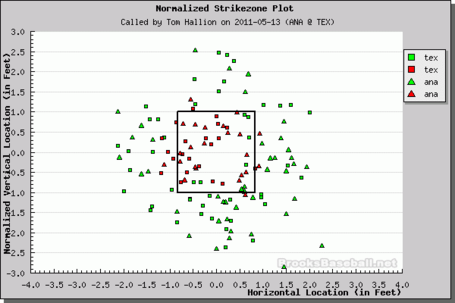