Yesterday, I mentioned that Colby Lewis's likely-lucky start was just the baseball gods smiling on the Rangers for once in this frustrating season. Today, they let us know they were only kidding.

Once again, the offense was clicking against a good A's pitcher today. In the third inning, every Ranger but Adrian Beltre reached at least once. Andres Blanco had a double. Julio Borbon and Michael Young actually walked in runs. Mitch Moreland hit the first grand slam of his young career -- off of a lefty no less -- and the Rangers chased Gio Gonzalez and his career 2.18 ERA against them out of the game with seven runs allowed in fewer than three innings. Matt Harrison even looked like he was bouncing back a little bit maybe, with four one-hit, three-strikeout, shut-out innings. He had three walks, but some of that was likely an iffy strikezone, and he also managed five swinging strikes.

At least that's what you saw on TV, or heard on the radio. According to Major League Baseball, none of that happened.

None of it makes any sense, of course. Crew Chief Gerry Davis just didn't want to wait more than a couple hours to see if the rain would clear, even though this was a day game and the Rangers and A's are both off tomorrow. It's not like Gerry Davis is known for mistakes, though. 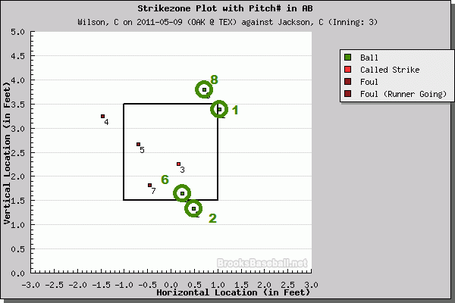 Even if he had a good reason for the call, the rule doesn't make a whole lot of sense. This game will be made up later, in its entirety. Why? If you're going to play the game anyway, why is it not just restarted where it had been left off? It's fair to allow a team to jump out to a 7-0 lead and then pretend it never happened? Who actually likes things being done like that, other than A's fans today?

If you were having trouble thinking of a way to make this baseball season even more frustrating, Davis, MLB, and the weather all gave you something you probably never thought of today. A seven run lead and an awesome performance almost across the board against a division opponent completely wiped off the board as though it never happened.

We saw it happen, Baseball. you're not fooling us, we saw it. We're not going to make believe. 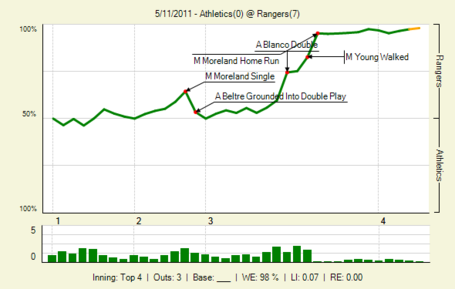 Biggest Contributions to Nothing (What is this, I don't even. . . ?)