Share All sharing options for: Bats Breakout To Bash Bay Team In Blowout

Man, Rangers fans needed that. For the first time in forever, things seemed to go right in every way. The bats leapt all over Brett Anderson, with six hits and a home run, and managed four walks when the balls weren't hittable. Adrian Beltre finally had a good game again with a home run and an incredible defensive play. Even Craig Gentry had a big hit to start off the scoring! All told, the offense put together eleven hits, six walks, and seven runs.

On the other side, there was Colby Lewis, who didn't have all his best stuff tonight, struggling with the velocity again and failing to record a strikeout for the first time since his return to the U.S. The baseball gods (and Sam Holbrook's strikezone, perhaps) smiled upon him, today, and saved him from damage, turning all of his fly balls in to outs. He managed to keep the ball in the zone, though, without serving many pitches up to be slammed. The lack of missed bats wasn't exciting, but at least he was able to avoid free passes and be efficient. Most impressively, he was brought in after a long rain delay to pitch another two innings, seemingly as a sign Ron Washington doesn't trust the bullpen, and did so without getting creamed.

When Washington did finally go to the bullpen, Darren Oliver reasserted that he's not a waste of space with a strikeout of Daric Barton, but Neftali Feliz proved to be the one relative negative from tonight's game. Feliz had trouble finding the plate, walking two, striking out none, and allowing an inherited runner (reached on an error against Oliver) to score on a sack fly. The good thing is, the game was in hand, and he got work. Perhaps he was rusty, and better to shake of the rust in a blowout than in a tight game.

Michael Young, meanwhile, continues to put a hurt on baseballs. Tonight he had three hits, with a double, a huge three run triple, and even a rare walk. Elvis Andrus was the only Ranger not to have a hit, but even he managed a walk. When your weakest offensive performance is your shortstop working a walk, it's not a bad day.

This was nice. At the very least, it was a reprieve from what a beat down baseball had become. Maybe, just maybe, it's a sign of things turning around. Maybe both the baseball gods and the Rangers themselves are going to get back on track. 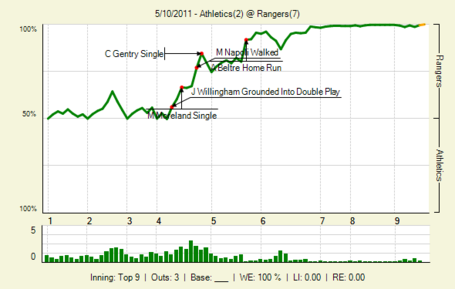 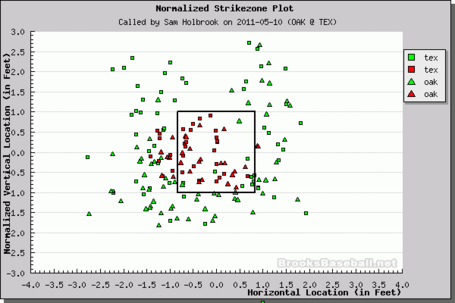