Texas obviously wasn't going undefeated for a full year. A blowout loss makes it harder to stomach, but the glorious thing about baseball is there's (almost) always a game the tomorrow to give you a chance of getting over it. With double headers, you have a chance to get over it before tomorrow.

There's something pretty kick ass about the 2011 Rangers when the same day they suffer their first loss, they still up their run differential by seven runs. That gives them a differential of +29 (!!!), six runs ahead of the next best team (Philadelphia), and twice that far ahead of the next best AL team (Toronto). Texas was the last baseball team to lose a game, and thanks to the night cap against the Orioles, they will be the first team to lose two. If they ever lose a second. . .

Bad games will happen. If they happen once every eight days, followed by beat downs, things will be very good. We're just shy of 5% of the 2011 season, so it may not be meaningful, but in that 5%, the Rangers are so far and away the best team it's awesome.

I saw hardly any of the early game, so I need someone to tell me if Colby Lewis was actually bad or not. On paper, he looks good. The velocity was disturbing, topping out at 90 miles per hour on his fastball, and I would like more strikeouts, but four in six innings would be nice. 10 swinging strikes is great, 65% of his pitches for strikes is good, and one walk is just fine. Five line drives suggests some of his stuff may have found too much of the plate if he can't get his velocity up to where it should be, but with all the other successes, giving up five runs and only going six innings seems like at least some, if not mostly, bad luck. But, again, I did not get to watch him, so if there was something actually going wrong, I'm open to hear it. If I get a chance, I'll try and watch a replay. If he can't reach his 2010 velocity he won't likely reach is 2010 success (without an on-the-fly change like Tim Lincecum), but even if he doesn't, if he gets his strikeouts and avoids his walks he's not going to be a bad pitcher, either.

Not that it would have made a difference if Colbyashi did have a good game. I don't know what the Rangers' apparent issue with young lefties is, but it's really frustrating. It's pretty crazy that the most prolific offense in baseball has already been shutout.

Matt Harrison, meanwhile, I did get to see, and he was awesome again. I'm so afraid of this, I'm so afraid that Matty Ice is just teasing us. 69 of 109 pitches in the zone, with eight of them whiffs? Touching 97 (AGAIN) on the fastball? This was the second straight start where Harrison both looked good and was good, but in the Quality Start department and the peripherals department. Is this legit? Is he really going to take a huge step this season? Is reading really this powerful? I'm just about to jump on this bandwagon, but I'm going to cry if it breaks down. 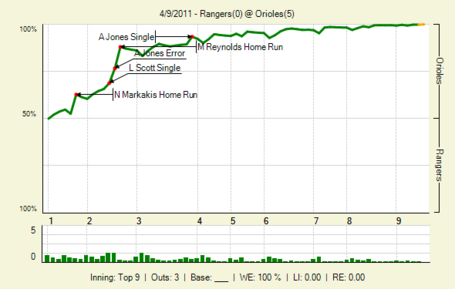 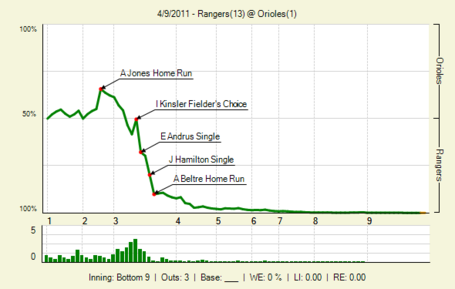 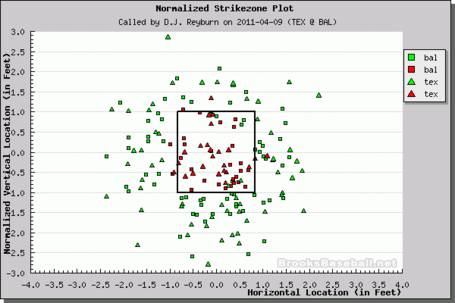