Are the Orioles a fluke or is their new roster a real threat?

WARNING: The following sentences may refer to an event that has been expunged from your memory! Read at your own risk!

On July 8, 2010, the Texas Rangers sat 50-34 on the season, and were looking at a soft series at home against the lowly Baltimore Orioles before the All-Star break, hoping to pad their record and their division lead.

Instead, it was four days of nightmare. In game one, they blew a 4-1 lead through the first six innings and lost. In game two, Neftali Feliz came in to finish off a four run game in the ninth, but gave up a game-tying grand slam to Corey Patterson (COREY PATTERSON!!!) before the Rangers lost in 10. Game three featured the debut of heralded new ace Cliff Lee, but Lee was smacked around as the Rangers lost 6-1. By the time game four happened, it seemed like a formality, as the Orioles won 4-1 and swept the soon-to-be-league champs aside like garbage.

It was the most humbling part of the greatest season in Texas Rangers history. For some, it has been cast out of memory as though it never happened. For others, the Orioles still conjure up dark thoughts of dread and terror.

Return, now, to April of 2011. The Rangers are the defending American League champs, and have started their title defense off with a dominant 6-0 run. Now they travel to Baltimore to play one of just four AL teams that had a winning record over Texas in 2010 (the others all had winning records, with two, Minnesota and Tampa Bay, making the playoffs, and we know what happened to Tampa Bay). Like 2010 the Orioles are not held in high regard, but unlike that 2010 series, if the season ended today (after six whole games), Texas-Baltimore would be the seeded American League Championship Series.

The Orioles are one of the only teams that can talk to the Rangers about hot starts, having gone 5-1 to begin the year with a sweep of the Rays and a win over the Tigers. To go with Buck Showalter's first full year as Baltimore's manager, the Orioles have a revamped roster, with the additions of veteran sluggers Vladimir Guerrero (Think he still kills the Rangers if he is not a Angel or a Ranger?) and Derek Lee, all-or-nothing third baseman Mark Reynolds, and sweet fielding shortstop J.J. Hardy to go with an ever-growing cast of young and developing talent, the Orioles believe their start is not just a fluke and rather signs of how well their new roster has clicked.

We shall see, but whether they have clicked or not, Rangers fans no well they have reason to fear the Orioles.

Small sample size time! For some, six games in to the season is enough information for them to jump to conclusions, and you should try taking these peoples' money. For others, six games are meaningless. For still others (like yours truly) they are a time of hilarity, meant to be looked at for how they can skew rates and break graphs. With that in mind, everything but the forecast in this preview is full of small sample size goodness.

The Orioles hopes for the future rest on some of the best young pitching talent in baseball, and in their young season, that is working out so far, with each of the above guys on pace for upwards of a six win season (good enough to belong on an MVP ballot most years), save for Jeremy Guthrie, who has been twice that good. So Jeremy Guthrie is going to have a historically great season. Or he has just pitched one really good game.

The return of Brian Roberts has to be inspiring for Orioles fans, after he missed most of 2010 with an injury. He is getting up there in years, but prior to last year he was a perennial All-Star-caliber talent, and it would be good for them to get him back. A handful of good games does not mean he is back, but it is a better sign than struggling.

The players are ranked here, by the way, in FanGraphs' Wins Above Replacement. If there happens to be a stat you are unfamiliar with, a handy glossary at the bottom of this page will give you all you ever wanted to know and more. For the moment, look at weighted On Base Average like OPS (on an OBP scale) and Fielding Independent Pitching like ERA. 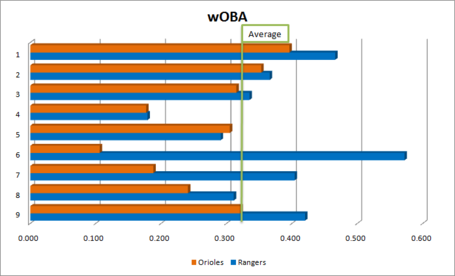 More small sample sizes, this time making Nelson Cruz look like the destroyer of worlds. Obviously you cannot read anything in to this other than how these folks have hit so far, but for what it is worth, ZiPS projects the Orioles' every day line-up to be about a run per series behind the Rangers in 2011. Baltimore's lineup looks a little more consistent one-to-nine than Texas does, with its weakest hitters projecting closer to average than Andrus and Borbon, but without as much strength in the middle of the order.

In all but the first two games of the season, the Orioles have used the same lineup, which means Matt Wieters will probably be getting a day off during the series. Luke Scott got the first two games in left over Pie before injuring his groin, and is currently doubtful. He has not been placed on the DL, so his projected .351 weighted On Base Average might yet make it in to the lineup, but Texas is probably looking at more Pie.

A righty-heavy lineup (Pie or Scott are the only lefties) might actually make the offense a little more formidable than it looks on paper against Texas, with Matt Harrison and Derek Holland starting games two and three. 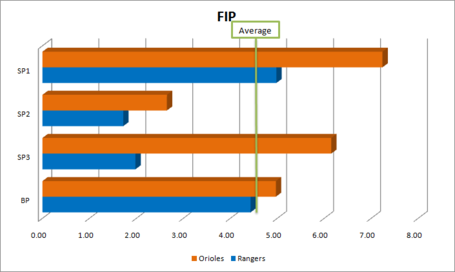 Once again, small sample size stuff. Harrison and Holland won't be keeping Fielding Independent Pitching rates under two for many starts, and won't likely be ahead of Colby Lewis.

As mentioned above, the Orioles are starting to give a lot of innings to their young pitching talent, and the Rangers will be seeing young arms in all three games this series, with a combined total shy of 420 career MLB innings pitched (almost 300 coming from Bergesen alone).

That barrage of youth starts with rookie Britton, who will make his second career start against an offense that has been destroying baseballs. Britton ranked 28th in the Baseball America's prospect rankings this off season, and served as the Oriole's second best prospect. His calling card is a vicious low-90s sinker, which he only threw about 10% of the time according to pitchf/x against the Rays (fewer if he actually throws a splitter I have never read about), though it could be mixing up some of his four seemers. Britton can also hit the high 90s with his fastball, and throws a sharp slider in the low 80s, but his change-up has raised suspicion in the past.

Arrieta was once an elite prospect like Britton, but is now in his sophomore year after managing to keep his head above water as a rookie. As a rookie, he showed both a propensity to walk people and an inability to get strikeouts, though he was just a rookie and should improve. His fastball sits in the low 90s, and he gets a lot of work out of his breaking balls -- a slider and curveball each thrown around 13% of the time -- which both have pretty good bite to them.

Bergesen is the relative veteran of the group, hitting his third season. His calling card is pounding the strike zone and administering fewer than the average number of walks -- giving up only one or two in a typical six inning start -- which allows him to be a passable Major League starter despite few strikeouts. He has not yet been very good in the Majors, but he also has room to grown, just like the others. He is not a high velocity guy, barely averaging 90 miles per hour on his fastball, which he pairs with a sinker and a low-80s slider about one fifth of the time each. The slider has solid horizontal movement a good bit of bite, and he also throws a change-up that comes in seven miles per hour behind his fast ball around 10% of the time.

Kevin Gregg serves as the Orioles closer, but the star of the bullpen in the young season is Jason Berken, who, through three innings pitched, has already struck out six with no walks and no runs allowed. 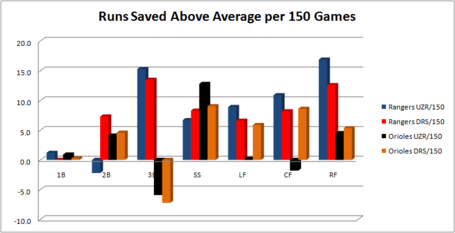 Unlike the other charts, this is not based on 2011's small sample, because defensive metrics are not really up yet. This just compares the career defense for the every day starters from this series.

As you can see (on paper, of course), the Rangers come out as the much better defense, likely to save close to a run in the field more in a three game series than the Orioles. The most hilarious difference comes out at third base. Mark Reynolds vs. Adrian Beltre is like Butter Knife vs. Jaws. The 3D version. It took a dead guy with a grenade to finish him off, and terrorizing a water park is way cooler than some yokel beach New York.

Anyway, the Rangers are good at defense and the Orioles are merely okay.

Do not worry, none of the small sample size silliness goes in here. It is still early enough in the year that the forecast for the series is based on projections, not Nelson Cruz's near-600 wOBA.

Anyway, if you put the offense and the defense and the pitching expected from the two teams and play the games 10,000 times, this is how it looks: 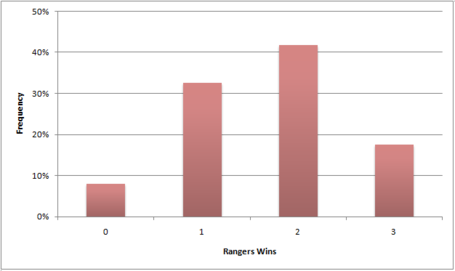 The Rangers' winning streak is not going to go on forever, and it is likely to end in this series. But that is simply because a sweep is never likely, just sometimes more possible than others.

In this particular series, the Rangers' chance of extending their streak to Detroit looks like about 18%. With the most likely result being two-out-of-three at 42%, the Rangers can probably expect to win this series around 60% of the time. Texas should probably expect to score around 15 runs and should expect to hold the Orioles to around 14. Also, tying the record for the best start in franchise history looks like about a 61% possibility. Of course, the Orioles have started out extremely hot and could well be improved past what a projection system like ZiPS would expect, so perhaps this is optimistic. Or perhaps the Orioles have just been playing over their heads (like the Rangers) for six games. In any case, winning a series on the road should always be considered a success, and Texas has a good shot at doing so in Baltimore.

But what if they do not? What if they drop two of three? That would just be two losses on the road to a hot team, and it would be a 7-2 start. How okay with a 7-2 start would you have been if we told you that was where the Rangers would be prior to opening day? 7-2 is still a tremendous start, and that is what makes 6-0 so great. The Rangers now have a cushion where they can drop a couple games and still be off to an amazing beginning to the season.