The Rangers have not played the bottom of the ninth once!

The Ron Washington era in Texas has been marked by slow April starts, but that didn't stop last year's team from winning the American League, and so far, 2011 looks like an exception. We should probably be cautious, and realize that this is just six games and there's a long way to go, but it's hard. It's hard realizing that the Texas Rangers are the defending American League Champions for the first time ever, and they are starting their title defense by pounding the American League. Irrational though it may be, Wash's gang this time around is not giving the impression they can just be contenders, they're giving the impression this could be a Rangers team that finally takes control of its potential and never looks back. At this point, seeing what we've seen, how worried are you that the Rangers will even spend a day out of first place, let alone fail to make the playoffs?

Yeah, it could happen. It just doesn't seem like it through the first week of baseball.

There was a lot of carping about new hitting coach Thad Bosley's quotes about wanting aggressive hitting and not liking walks or "moneyball." But it should always be remembered that A) hitting coaches probably don't do a lot to change their teams and B) quotes can be misleading. Swing rates are one of the first things to stabilize in an MLB season, and right now the Rangers are looking fairly selective, going in to today placed in the bottom half of the league in swing%, and, more importantly, only three teams have chased balls out of the zone more often than the Rangers. The walk rate hasn't been that great, but the strikeout rate has been the lowest in baseball, while the offense has been the best despite being well below average on balls hit in play. The Rangers offense has been boosted by an unreasonable home run rate, but they don't look particularly hacktastick right now, which can be one of the earliest signs of potential problems, which should make you feel pretty comfortable that this offense can remain elite as long as they're healthy. Perhaps even better than we expected.

Today that patience was particularly impressive in how it handled Felix Hernandez. King Felix was still King Felix, striking out six and going seven strong innings, and he likely would not have given up a single run if not for back-to-back errors by Jack Wilson. But what the Rangers were successful with was working the count against Hernandez, getting him to 107 pitches through seven innings and taking three walks. That got him out of the game with a chance to hurt the bullpen, and that's exactly what Texas did, rocking the Mariners' relievers for four runs to take the game from tight to blowout in no time flat. You are very rarely going to get to hit one of the absolute best pitchers in baseball well, but if you can take what he gives you and work long innings, you can give yourself a good shot both while he's in and against the bullpen once he's out. That's what the Rangers did, and while I admit I got to watch very little of the game (mostly listed to the radio as I was out), it was certainly one more impressive note on an already exciting resume for the offense.

On the Rangers' end of the pitching, C.J. Wilson had a second straight less-than-impressive start. He managed better efficiency than he did against the Red Sox, going seven innings, but the Mariners will help with that. Two walks isn't too bad, but two strike outs is a big concerning. His fastball velocity struggled, averaging only about 88 miles per hour (as opposed to just shy of 91 last year), and he managed just four swinging strikes. Erik Nadel on the radio expressed dismay over Wilson's velocity, as well. Now, certainly Ceej has not been bad in either of his starts, just not what we got to see last year. Even if he had been bad, it's just two starts, far from time to panic. It's just not something that can continue if he want's to reproduce the value he put down in his breakout year as a starter.

Also, the strike zone of Alfonso Marquez seemed a bit squat, and Wilson seemed to have responded well by staying away from the high and low extremes of the zone (unlike Hernandez, who continued to try and work low it seems), showing an ability to adjust to the zone the umpire was calling. That's going to result in more contact, but as long as it's weak contact it's worth it for the efficiency.

He was good enough for Texas to win today, and that's what matters today. The Rangers have now reached six wins before another team has gotten to five. Just two teams remain undefeated, with both still playing tonight. The first is the Reds, and the other, the Orioles, serve as the Rangers' next opponent, so there will not be more than one undefeated AL team left this weekend.

A day off to think about how great the start of this season has been before the Rangers travel to Baltimore, with a shot at tying their best start in franchise history. Winning is addictive, I'm not sure I can last a day.

Oh, by the way, do you think the Mariners are sick of Mitch Moreland? I wonder if they think they got the lesser first baseman in the Cliff Lee trade.

Also, do you think Michael Young gets close to this? 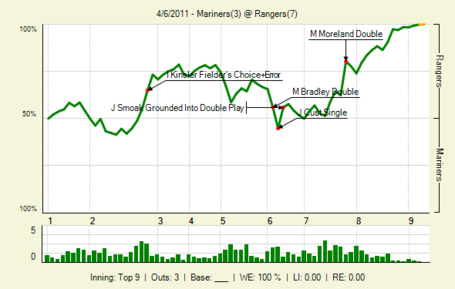 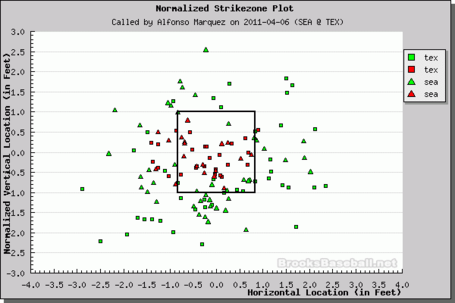