Share All sharing options for: Alexi Ogando Strong As Starter, Needed In Bullpen

Funny thing about the Rangers start to 2011 with a one run win feels disappointing.

Game five of the young season was the closest yet, but it still ended the same as the rest, as Texas remains undefeated, and has clinched at least a victory in their first divisional series of the year.

The Rangers won 3-2 on the strength of Alexi Ogando's first career Major League start. Ogando went six shutout innings, and likely could have gone more if the Rangers were not worried about keeping him fresh, as he was only at 90 pitches. He managed to keep the ball in the zone a respectable (for a first career start) 61% of the time, throwing almost entirely fastballs and sliders. In fact, 49 of his 90 pitches were fastballs, but it worked, living in the mid 90s until his last twenty pitches or so, and garnering six swinging strikes. All told, he had four strikeouts to just two walks, and only a handful of scattered hard hit balls.

What's interesting (maybe scary) about the Rangers rotation is its relative lack of "proven" guys. Most rotations in baseball have guys who they can be very confident in what they'll get from them, good or bad, but the Rangers' longest track record is an up-and-down reliever who just became a starter last season. He joined a busted prospect who returned from Japan in breakout seasons in 2010, and they are joined by a couple lefties with a lot of potential but not a lot of big league success. So we've had five starts now that have looked either disappointing or promising that are harder to just shrug off as one start than they would be with other pitchers because of how relatively large a percentage of the sample they are. So, once again with Ogando now, it's only one start, and it was against the Mariners, but he didn't fall on his face and looked like he can be a solid starter when the Rangers need him to fill in.

The title is snark, of course, as six shutout innings from Ogando is better than one, but it is a tad ironic that the bullpen had its first real struggles of the year when Ogando was busy in the rotation. Mark Lowe allowed three its and got just one out, giving up two earned runs (one inherited by Darren Oliver) to let the game get close, but Oliver returned for a flawless eighth, and Neftali Feliz continued his early season dominance to close it out.

In other news, Michael Pineda is the stuff of nightmares. You never want your division rivals to have good prospects, and you definitely don't want them to start out well, but Pineda looked like he could become a force to be reckoned with next to Felix Hernandez at the top of Seattle's rotation. Like Ogando, he chiefly threw just two pitches, fastball and slider, but also threw a change-up so hard (about 86-91) that pitch/fx thinks it was a fastball. He regularly challenged 98 miles per hour with his fastball, and struck out four Rangers to just one walk. He wasn't dominant, with just three swinging strikes, and he gave up three earned runs, but he flashed all the stuff he's said to have, and three runs against the Rangers' offense so far this year is kind of a roaring success. Just like Ogando, it's one start so we can't draw a whole lot from it, but you'd feel a lot more comfortable if he melted down than if he looked respectable. At least he didn't dominate.

Unfortunately, he and his bullpen mates did succeed in stopping Nelson Cruz from hitting a home run, keeping him from setting a record with five straight games with a homer to start the season. Sad times.

Oh, the Rangers were with leather today, too. In the highest leverage moment of the game -- the seventh inning with two outs, the bases loaded and Milton Bradley at the plate -- whipping boy Julio Borbon made a great diving catch in center to save likely multiple runs and the game. It was a good catch, but the moment was what made it great. Same can also be said of Michael Young snagging a potential double at first base, one of the best plays he's made in a long time. There may be a position for him in the field yet! That's two players who get a lot of criticism from some circles of fans who made critical plays that don't quite show up in the box score, so they probably earned a reprieve for at least one night (Young also had a run scoring double that proved the difference, and that does show up in the box score). 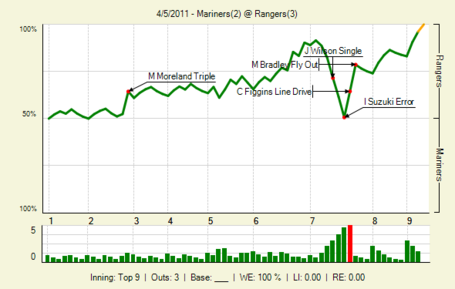