The Seattle Mariners looked more dangerous than the Red Sox, losing by just two runs, but Texas remains undefeated on the young 2011 season, and keep pace with the Orioles for the best record in baseball.

Derek Holland was not able to keep pace with Matt Harrison in terms of young lefties breaking out, however, but he was solid. He managed a Quality Start with six innings pitched and three earned runs, but he was facing the Mariners. His stuff was good, amassing 10 swinging strikes, getting his fastball in to the mid-90s, and getting five strikeouts to just one walk without a whole lot of good contact, but he struggled mightily with efficiency, a major problem that has kept Holland from really hitting the potential his breakout year in the minors suggested he has. Just over 60% of his pitches went for strikes, missing with his change-up half the time (though seven of his whiffs came on the change), and in the fourth inning in particular he started missing the zone, and then hanging pitches when he tried to get them over, only to have them knocked around for runs.

Overall, not a bad performance. On paper, not any worse than C.J. Wilson or Colby Lewis started with, but they started against the Red Sox, not the Mariners, and they don't have the questions surrounding them Holland does. Still, he worked out of problems in the fifth, and for most of the innings showed excellent stuff and an ability to get teams to miss (and it should be pointed out home plate umpire Ed Rapuano seemed adverse to giving him the high strike). He won't be able to beat better lineups with that much unsuccessful nibbling, and if he can't be more efficient he's going to hurt the bullpen, but it's also still just one start.

On the exciting side of things, the power displays of Elvis Andrus and Julio Borbon continue. Borbon put forth a triple, while Elvis Andrus hit his first home run since September of 2009. It wasn't just a home run, either, it was a no-doubt-about-it moon rocket deep in to the left field seats. In a season where the Rangers are launching homeruns almost at will, Elvis Andrus has one of the hardest hit so far. That gives him four extra-base hits in four games, and if he wants to tack this power on to his improved discipline from last season and the defense we know he can play, he could be hitting the level of a star at a ridiculously young age.

Nelson Cruz, also, is now the third player ever to hit a home run in each of his first four games. The first guy is Willie Mays, and the second guy ended up hitting 70 that year. No one has ever done it in his first five games, so Nellie has a chance to make history tomorrow. And maybe more after that if he could just stay healthy. . .

The Rangers remain undefeated. The season is still young, but a four game winning streak is never a meaningless thing, and being four games above .500 with a two game lead in the division in the first month is not a bad start at all. A long way to go, but the Rangers could not be starting off any better. 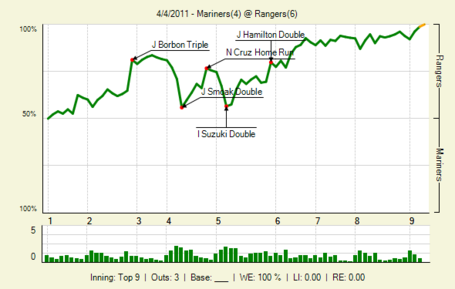 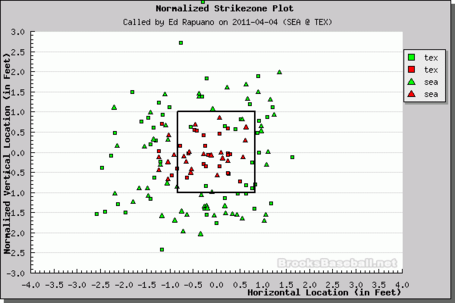