The Mariners probably will not be as bad in 2011, but are they good enough to stand toe-to-toe with Texas?

Share All sharing options for: Rangers Host Mariners In First Rivalry Game Of 2011

The Rangers open up division play today with the defending last place squad from the West, the Seattle Mariners. It is also the first battle for first place of the season, as the Mariners are coming off a series win over the A's and sit just a game back of the Rangers following their own sweep of the Red Sox.

Texas can either bolster their spot at first in the division by vanquishing their (so far) closest opposition, and continue riding high on an incredible start, or they can fail and start worry about yet another stumbling April.

Unfortunately, less of a preview than we usually have for you, but all the stats are still here. Use the charts for a quick guide and go to Lone Star Ball for Christopher's doubtless excellent preview as a companion. 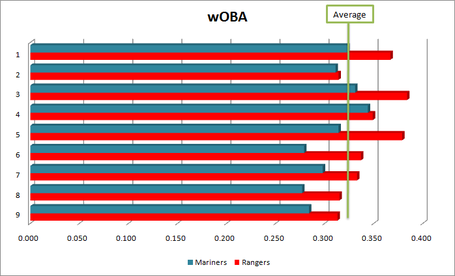 At this point in the season, the stats you see are still projections, using Dan Szymborski's ZiPS, and if those Mariners bars look weak, it is because they are. The Mariners offense looks to be historically bad yet again in 2010 without some surprising performances. Now, Safeco Field does not help, but you can see only three players project to even surpass last season's average in weighted On Base Average, and only Cust does so comfortably. The Rangers, meanwhile, look to have the more productive hitter at every spot in the lineup.

Ryan Langerhans (projected .295) has already played twice this season and could well play in this series, but I doubt the Mariners have Saunders in the Majors just to ride the pine most days. 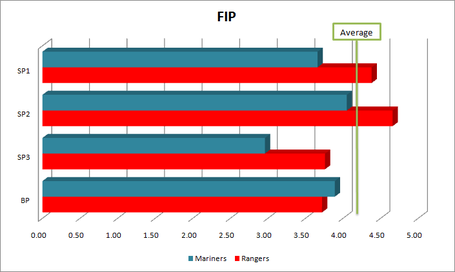 Now that we have laughed at the Seattle offense, they get serious. Again, Safeco vs. Rangers Ballpark in Arlington skews these projections, but the Mariners' rotation does look pretty good. The problem with Bedard is not an inability to pitch, it is an inability to pitch often. Hernandez, of course, is the reigning Cy Young winner, and he will not be turning 25 until three days after his start this series; he is probably going to be frustrating to face for years.

The exciting thing for M's fans this series will be Michael Pineda making his debut, and he will have to do it in a tough situation. He was Baseball America's No. 16 prospect in the country this off season, and Seattle hopes the crown jewel of an injection of youth to change their coming fortunes. He will be opposing Alexi Ogando who, while not a rookie or a top prospect, will also be making his first start. So who the hell knows what happens in game two. 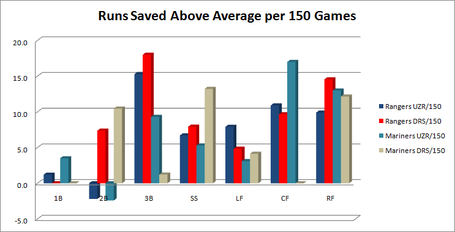 For all there fame as a team who utilizes defense as a team-building strategy, on paper, the careers of the Mariners fielders do not come out looking much, if any, better than the Rangers. The biggest Mariners wins, in fact, are places where the two metrics -- Defensive Runs Saved and Ultimate Zone Rating -- are in disagreement over the small sample sizes of Ryan and Saunders. 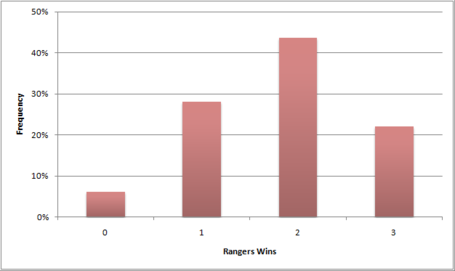 The various projected performances of the two teams looks, on paper, to be a pretty one-sided affair. If everyone plays as expected by ZiPS this year (which should obviously not be considered a guarantee), Texas would probably win this series around two thirds of the time it is played, taking at least two out of three 44% of the time, and taking on a sweep another 22% of the time. The Felix Hernandez start is obviously the most daunting, but even that comes out with the Rangers winning around 59 times out of 100. All told, Texas should probably expect to score around 14 total runs in the series, and should expect to hold the Mariners to a couple runs behind that.

Anything can happen in a short series, of course, so do not just assume the Rangers will run through the Mariners, but you can expect that Texas's hot start should not be slowing down before King Felix's 25th birthday.