Colby Lewis's last start was not that good overall, but it was extremely promising, with a good performance in almost every inning and a near return of his previous velocity.

Today, Colby Lewis had not only another promising start, but this time it was a good one, too. He managed to go eight innings with six hits, one walk, six strikeouts, and just two runs allowed on solo home runs. Yes, the A's offense, which hates to work a walk this year (8.1%, ninth in the AL) helped a bit with the free passes, and a better offense would likely score more runs, but Oakland hasn't been especially prone to strikeouts. Most impressively, Oakland's bats have been some of the hardest to miss in the American League this year, with a 7.2% swinging strike rate that ranks second in the league.

Also true is that the A's ballpark helped contain a few fly balls that might have been home runs, and it's an offense that won't punish mistakes as much as others. But what the A's didn't help with was Lewis having a second straight start with his velocity back to 2010 levels, falling just short of 92 on a number of occasions, averaging close to 89 on the fastball, and, significantly, topping 90 miles per hour even after throwing 100 pitches. The A's also didn't help his slider move more similarly to how it did during 2010, nor did they help him throw 71 of 109 pitches for strikes, despite the bottom left part of the strikezone being completely non-existant according to Paul Nauert.

This wasn't a career best start for Lewis, and against a better offense in a smaller park he probably does give up more than two runs, but he still could have given up more and had it be a good start all things considered. Far more importantly than how good the start was, it was another game of greatly encouraging signs, getting a ton of swinging strikes against a lineup where that's legitimately impressive and showing all the things he did as one of the best pitchers in baseball in 2010 (yes, he was). As long as he's showing the same skills, you can probably feel comfortable that things will be okay from Colbyashi.

Also nice was seeing the offense get around to scoring again, especially off a good pitcher for a division rival in an unfriendly park. Every ranger but Mitch Moreland reached, Michael Young, Mike Napoli, and Nelson Cruz contributed home runs, and Napoli added three walks on top of it. Julio Borbon even had a pinch hit (and David Murphy had another ball Borbon probably gets to sail over his head)!

It's nice of the Rangers to break a two-game skid with a reassuring game like this. Hopefully this time they keep it up for a while.

How good is this year when a two game skid stands out as awful, by the way? When April ended last year, the Rangers had 11 wins half a game back in the division. Today they sit at 16 wins (the same total they had in 1996) and a full game lead in the AL West. Not bad. 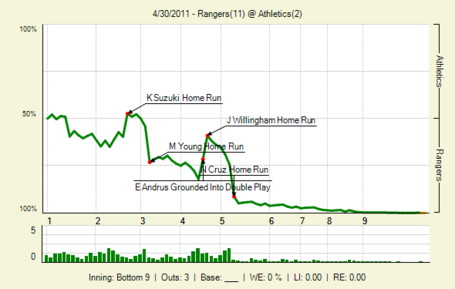 Rangers Lose In 10 Innings To A's, Fall To 2nd Place