I only have so many ways to express how incredible it is that the Rangers have started the season the way they have. The Red Sox were not unfairly hyped, they really do have a vicious lineup, great defense, and incredible starting pitching (at least on paper). They deserve to be the favorites, but the Rangers have served Boston and the country an emphatic reminder that they are still the defending AL champs with a sweep of the Red Sox to start the year.

And not just a sweep, but a beat down of a sweep, with a 26-11 total score, both holding the Red Sox to fewer runs than they should be scoring, and knocking them around way more than any team should expect to do. The offense continued to power today, scoring the first four runs on four solo shots. Ian Kinsler was walked to start the game, preventing him from leading off three straight games with a home run, but he's still launched one in to the seats in his first AB of every game this year. Not content to let Ian set a 162 home run pace by himself, Nelson Cruz became the second right handed hitter in Ballpark in Arlington history to hit a ball in to the upper deck, prompting this reaction from Kinsler (h/t Christopher):

Mike Napoli has also homered in each of his starts, and David Murphy opened the scoring by homering on a golf swing. But as nice as the offense was (despite some baserunning gaffes), the story today was Matt Harrison.

Harrison's line was seven innings, eight strikeouts, two walks, and one earned run, which is always good, but especially good against the Red Sox. Yet even that stellar line does not quite do him justice. His stuff was electric, with fastball was topping out at nearly 98 miles per hour, a vicious break on his slider and cutter, and seemingly perfect location through the first six innings. 71 of his 108 pitches were for strikes -- nine swinging -- with only two line drives hit off of him the entire game.

His command seemed to lapse a bit in the seventh, but he still managed to reach back for plenty of velocity on his fastball, and in that inning, like the game, he was better than the boxscore suggests. His walk to Kevin Youkilis featured a clear strike on pitch four, and it took a ground ball that went just Past A Diving Michael Young™ for there to be any runs in the inning. His second walk, as well, to Darnell McDonald also looked a lot more like a strikeout than a walk.

He was, essentially, dominant. Almost no solid contact, and some poor luck and bad calls are all that stopped him probably from throwing 7+ shutout innings with no walks and double digits in strikeouts. Against the Red Sox. Certainly this is a small sample size, just like Colby Lewis's uninspiring start was a small sample, but we know Matt Harrison has good stuff, we know he has the physical talent to be a good starting pitcher. Today he showed he can put those things to work and dominant a great lineup, and that's exciting. This wasn't a fluke, this is something Matt Harrison has it in him to do, and for one week we can day dream that this year he will. The young Rangers starters stepping up and becoming solid-to-good pitchers would go a long way towards making this maybe the best Rangers team that has ever played, even better than 2010.

This has been an incredible three days. The start of the season is always exciting, but beginning your title defense by pounding the team everyone expects to dethrone you? Amazing, I cannot imagine being more hyped on the Rangers than I am right now.

Bring on the Mariners. 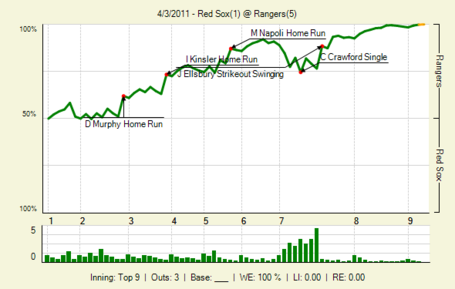