I find there are two kinds of sports fans. Some get more frustrated when their teams play well but manage to lose, others get more frustrated when their teams lose outright because of failure. If you are in the latter category, you hated the first two games of this series. If you are in the former, like me, you hated today. Sure, well played games that just don't result in a W are a good sign, but I hate them.

Today, the Rangers matched the Blue Jays hit for hit. The Blue Jays had more walks, but they also had more strikeouts. The Rangers, though, had a whole lot more line drives, and when they weren't hitting line drives, they were getting the ball in the air more. Texas even stole five bases to Toronto's zero, and Alexi Ogando set a new career best with seven strikeouts.

That's not the kind of game you usually lose, especially not by three runs, unless lots of little things go wrong. And that is what happened to the Rangers.

Small, individual moments made up the problems with this game. First there was Ogando, who overall pitched well, but started the first inning with back-to-back strikeouts before going up 0-2 on Jose Bautista. He couldn't get the third, though, and Bautista walked. That was followed up by a meatball to Adam Lind, and the Blue Jays were up 2-0.

The next two big moments came courtesy of the umpires. In the fifth, after a lead-off double, Ian Kinsler was picked off at second by the catcher. While he was pretty far off the bag, he was also pretty clearly safe going back. Both Elvis Andrus and Michael Young followed up with fly outs to right, which may have advanced Kinsler to third and home without the incorrect call at second.

The following inning, with one out, Nelson Cruz was called out on this pitch: 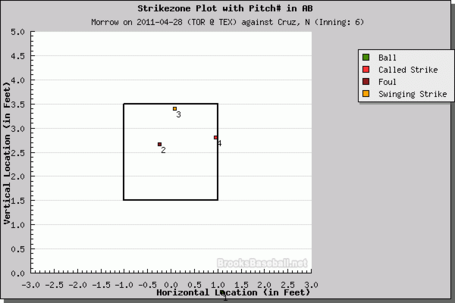 Now, that's probably a strike. Watching the replay, it looked like it caught the front corner of the plate. The problem was not that strike by itself, but the strikezone given to Alexi Ogando compared to that strike: 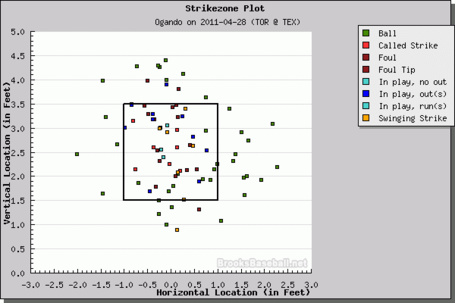 Six pitches from Ogando that caught just as much of the plate, if not more, called balls. That's a problem, and it's a problem that needs to be fixed, just like calling Kinsler out at second. They didn't necessarily cost the Rangers the game, but they might have, and it shouldn't be happening, not when there are legitimate methods of improvement out there.

The umps didn't make the Rangers' defense fall apart in the ninth, though. Darren Oliver couldn't field a bunt, allowing two runs to score, and two more errors, each with their own runs, followed as well. That turned a close game in to a three run Blue Jays victory, and it was maddening.

Texas was not outplayed by three runs tonight, but they did also make stupid mistakes that should never happen (not to mention Ian Kinsler failing to turn an easy double play that ended up not giving up any runs). And whether they maybe should have won this game or not, they were still thoroughly beaten down over the series, and that's disheartening.

They also have still had a very nice April, so it's not time to panic or anything. But this was probably my least favorite game this year. 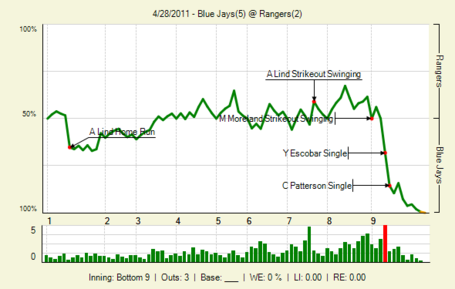 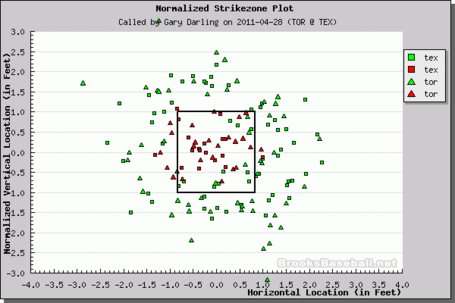