Share All sharing options for: Rangers Avoid Sweep, At Least

The Rangers' MVP is on the Disabled List, and was not hitting even when he was playing. He's been joined by the closer. In the meantime, most likely the second best player on the team has been in a slump. Their best starting pitcher from 2010 has struggled. Their intended starting centerfielder has struggled so much he's lost his job to someone who cannot play the position competently.

These are all the kind of things that sink teams, at least for a little while. If you were told, at least for the first month of the season, that Neftali Feliz and Josh Hamilton would get hurt, David Murphy would be playing centerfield, and Colby Lewis and Nelson Cruz would be struggling, you would probably expect the Rangers to be off to yet another poor April start. Yet there they are a game and a half up in the division, tied for the most wins in the American League, and outscoring opponents by nearly a run per game.

That better-than-you-could-expect start, and the wins it puts in hand, are huge. It means if the Rangers who have disappointed are ever back to their expected forms, things could go extremely well. It means if the Rangers who have stepped up, like Michael Young and Matt Harrison, hit some regression, there are reasons to expect that won't mean a collapse. And it means that a series like this, where everything seems to be going wrong, can be absorbed.

And just like that start is huge for the eventual record, managing to get a win in this series where everything seems to be going wrong is also huge. The Rangers merely made certain a four game sweep won't be coming, and gave themselves a shot at a split tomorrow, but considering the beat down the Blue Jays handed out in the first two games, and considering how many things went against Texas tonight, a sweep would be entirely unsurprising, and a split would be more than okay.

Just one day after Matt Harrison took a step back in his promising season, Derek Holland followed suit. Holland allowed five runs in just five innings, gave up some very hard hit balls, and struck out just two against three walks; absolutely a poor start. However, it wasn't all a matter of his lack of efficiency, or serving up hittable pitches. While all the runs were technically earned, Steve Bartman II and Michael Young were no helps.

The Blue Jays scoring started in the third. With two on and one out, Jose Bautista fouled in to the crowd, shallow enough for Adrian Beltre to get his glove under it. A fan, however, went against his sworn duty and got in the way, breaking up a near-certain out. Bautista lived to walk, Adam Lind brought in Corey Patterson with a sacrifice fly which would have been the third out if not for the fan, Juan Rivera singled in a run, and the Rangers were down 2-0. If not for a fan stopping the home third baseman from getting to a fly ball, it would most likely have been a scoreless game in the bottom of the third, and Holland would have been saved several pitches in the inning.

Even after that, though, the Rangers piled on to take a 6-2 lead in the bottom half. In the fourth, the Rangers had a runner on first and two outs before Yunel Escobar hit a ground ball up the middle which went Past A Diving Michael Young™. A competent second baseman most likely gets to that ball, and at worst it's a diving stop and runners are at first and second. Most likely, it's an out and the inning is over. With Young in the field, it means there are runners at first and third.

No runs had scored, but Young wasn't done putting his defensive stamp on the game. The very next hitter, Mike McCoy, grounded in to yet another PADMY™, Patterson scored from third, and, once again, instead of the inning being over, there were two on with one out. The next hit, by Jose Bautista, was completely on Holland, but with a solid second baseman that hit is a simple double with no one on and one out in the fifth (if all things stay the same) in a 6-2 game. Without the PADMYs or the silly fan, the game remains one-sided and Derek Holland, walks and all, is likely surviving deeper in to the game.

Obviously, Michael Young needs to be playing. The Rangers don't win without his two run double in the third, and he's been one of the best hitters this season. The problem is not the bat, but that Young has no defensive value, and the Rangers insist on putting him in the field, anyway. You want to give Kinsler some days off, but either he needs to have full days off and Andres Blanco needs to play, or you open yourself up to a frustrating hole in the middle infield when you play Young. And tonight, that frustrating hole made the game closer than it needed to be. Of course, that's why you don't walk people and why you get strikeouts, so that your fielders and the fans can't screw things up too much, but one fan and one Face of the Franchise are on notice tonight.

Fortunately, it was still a Rangers win. Rivera homered off of Cody Eppley to tie it in the seventh, but Mitch Moreland responded with a home run of his own two hitters later to give Texas the lead. Darren Oliver struck out Edwin Encarnacion with runners at the corners, and the Rangers held on. All is okay for one day, but I sure do miss blowout wins. 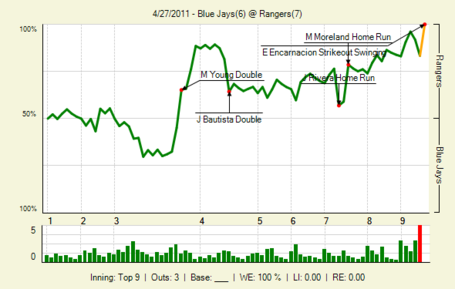