Rangers Have Off-Day, Blue Jays Do Not

Share All sharing options for: Rangers Have Off-Day, Blue Jays Do Not

Only Toronto showed up for a baseball game in Arlington Tuesday night, as the Texas Rangers were nowhere to be seen.

Seriously, there was not a game tonight. If you don't want to believe me, you can click the jump, but only at your own risk.

I have nothing to add on this game because, assuming you are a Rangers fan, there is probably nothing you want to hear about it. Matt Harrison was either lying to us in the first part of this season and is his usually, awful self, or he had a bad game. Please, for all that is good and holy, be the latter, Harrison.

Julio Borbon, of all people, carried the Rangers' offense, while Elvis Andrus continued to be a prototype No. 2 hitter by grounding in to two double plays, and attempting two others when no one was on base.

Seriously, though, this is just one game, but one game that served as an example for why Elvis Andrus shouldn't hit second. He is good for a player so young, with great value thanks to the defense he plays at a premium position. He likely has a very bright future as one of the best players in the history of his franchise. But, at least for now, he is quite possibly the weakest every day hitter on the Rangers. The two hole, despite conventional wisdom, has more leverage in general than any other position in the lineup. Is that where you put your weakest hitter? If so, you're going to have some nights like this.

Go get 'em tomorrow or something. 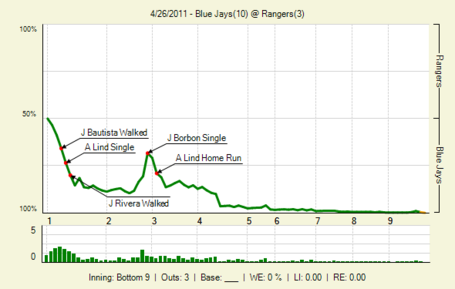 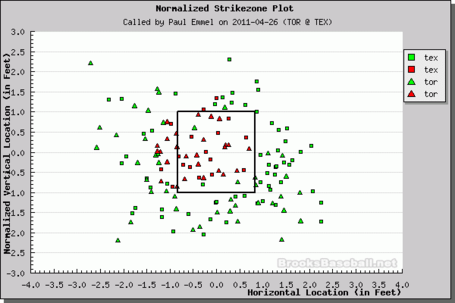