For four innings, it looked like a recap of the Rangers loss to opening the four game set against the Blue Jays would be along the lines of "Colby Lewis was not quite back to 2010 form, but he was closer than he has looked yet this season." Through the first three innings, finding the strikezone wasn't an issue for Colbyashi, hitting the plate over 65% of the time with plenty of missed bats. In the fourth, the control (and the velocity) began to dip, and he took 22 pitches to get out of the inning, thanks to throwing as many strikes as balls, but he still managed to escape unscathed.

Then came the nightmarish fifth inning.

Lewis began the fifth with the same lack of command he had in the fourth, walking Travis Snider on six pitches. A low strike was called a ball, but no umpires call the low strike, and an outside pitch was called a strike, anyway. The only clear strike, Snider managed to foul off. Other than that, Lewis couldn't find the plate to save his life, and a runner was on.

And yet, he nearly got out of the inning okay. He tried to start off John McDonald with a ball, but John McDonald would have none of that and turned it in to a first pitch pop up.. Then after Chris Woodward fell behind 0-1, he, too, turned a high pitch in to a pop up. Despite a lead-off walk and a consistent failure to find the plate, Colby Lewis had thrown just nine pitches and was one out from escaping.

Then Lewis started finding too much of the plate. Another low pitch to start of Yunel Escobar failed to be called a strike, so he grooved a fastball down the middle, which Escobar fouled off. He went very high, but Escobar was still able to make contact for another foul (keep this really high pitch that still gets contacted with in mind). Then he went back to the old reliable dead-center-of-the-strikezone location, and Yunel Escobar turned it in to a hard ground ball to center to put two on for Corey Patterson.

Lewis continued to through balls right in the middle of the plate, but it was not yet hurting him, as Patterson fouled a pitch off, then whiffed. Up 0-2, Lewis then tried to waste a pitch. And this is what I mean by "waste a pitch:" 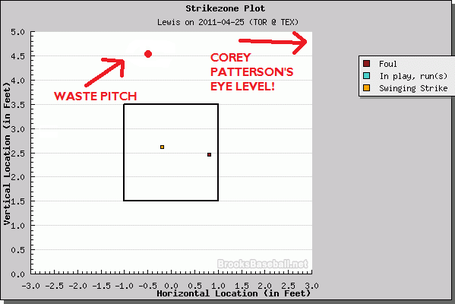 Patterson hit that out of the park!

Then it was 3-0. Lewis had not pitched particularly well, but he had given up a ground ball, and then a home run on a pitch that no one should ever even swing at. Not exactly time to bury the guy yet.

The problem was how he followed that up. Lewis's first pitch to Jose Bautista was a slider with no break that found the center of the plate, which is the kind of pitch where you don't wonder whether or not Bautista will hit out, you just wonder how far (very far was the answer). Against Adam Lind up next, the only time Lewis found the plate it was once again dead center, and probably lucky to merely be a foul. After Lind walked, Juan Rivera seemed to be salivating at facing Lewis, eagerly swinging and missing at the first pitch before catching another high (but this time realistically hittable) fastball for a home run.

This inning is explained in detail because this inning was the story of the game. The Blue Jays never scored before or after. The Rangers offense was not notably good or bad. Four runs is the low end of okay offensive output, but they weren't facing bad pitchers, and they were getting the ball in play alright. Nelson Cruz, perhaps the second most worrisome part of this team playing right now after Lewis, even had a walk and a home run, and Elvis Andrus just missed one to dead center.

The entire story of this game was one inning by Colby Lewis. One disaster of an inning, where he either couldn't find the plate, or found too much of the plate, exasperated by a home run that makes Vladimir Guerrero's jaw drop. There were some good signs from Lewis, who managed four innings of visible improvement. Lewis had eight swinging strikes over five innings, and over the first four innings, his command and location were mostly better than they had been on the season so far, with three strikeouts, and two walks helped along by more sketchy umpiring. Most importantly, the velocity was back to the levels expected, with a fastball topping out at 92 miles per hour and averaging just under 90. The problem was how quickly the command and velocity both disappeared. Good signs, but the bad signs outweighed the good. The good means you can maintain that shred of hope that Lewis will regress to his 2010 performance, but the bad means you're more justified in panicking.

Fortunately, the rest of the rotation is doing the opposite by being better than most expectations, and there are three more games in this series. The one bad sign from this series so far won't be participating in it again. 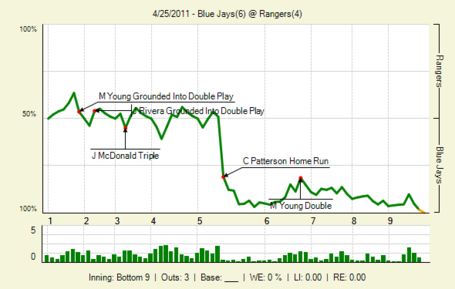 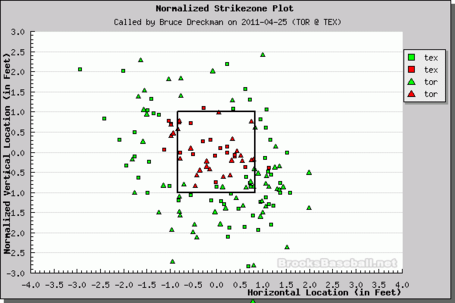