Share All sharing options for: Rangers Survive Royals For Sweep

In a game where 17 hitters reach base with three home runs, where you see a six run lead, and where the starter goes seven innings with ten strikeouts to one walk, you don't expect a close finish.

Texas was on its way to a nice, easy victory. C.J. Wilson allowed four runs thanks in part to a .375 BABIP, but pitched extremely well, and certainly well enough to help the Rangers along to a comfortable 8-4 victory. Tomko came in to get the final six outs, and was greeted by a single to start the eighth, but escaped unscathed thanks to a double play and a strikeout of the reborn Jeff Francoeur.

Then came the ninth. Tomko proceeded to stretch his strike out run to three in a row before falling apart just one out from victory. Alcides Escobar singled, Andres Blanco couldn't make a difficult out on a Chris Getz ground ball, and there were two on for Mike Aviles.

Mike Aviles (Mike Aviles!) promptly blasted his second home run, and just like that, it was a one-run game.

In reality, it was not such a huge melt down as the score indicates. Tomko struck out three of the seven hitters he faced, and induced two ground balls. One ground ball was a double play, the second was a single. A different defensive set-up or a different route on the ground ball, and Getz is out to give the Rangers an 8-4 victory. The last guy he faced just happened to get a meatball, and a game that was never really close ended up looking tight in the box score. If Getz is out, the game probably is not quite as one-sided as 8-4 tells you, but the Royals were not quite as close as 8-7 suggests, and Tomko was not quite as bad as his runs allowed suggests. The home run only took the Royals' win expectancy from just over 1% to just under 4%, and it's certainly nothing to panic about when the last guy in the bullpen has some bad luck in a blow out and the team wins anyway.

If you're keeping up with run differential you can feel free to be upset about a lost opportunity (Texas still leads by two, but the runner-up Cardinals have yet to play), but other than that, a win is a win, and a sweep is a sweep. Every hitter but Mitch Moreland, who deserves a day off from killing baseballs, had a hit. The Rangers are right back to the team they looked like before the Angels series, with the best record in the American League, a multiple-game lead in the division, and an overall track record of dominance. 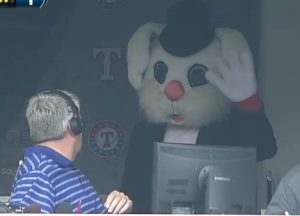 Frustrating final out, but another good day, finally another good series, and the continuing of a good season. The Rangers look like the best team in the American League, and close wins shouldn't take away from that. 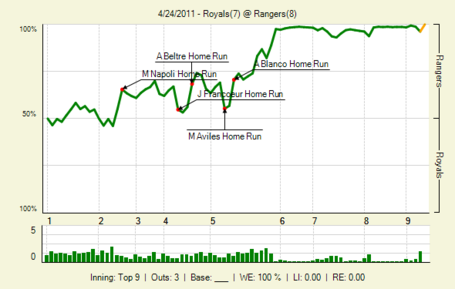 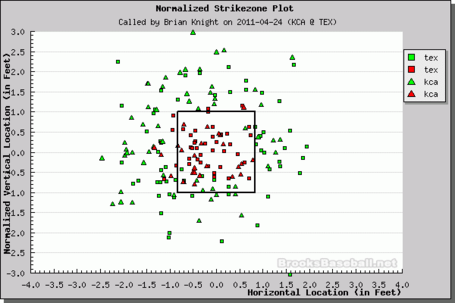