First, a message to John Rhadigan that I don't want burried after the jump: John, we as Rangers fans do not want other players' hitting streaks to continue against the Rangers. The most excited you get during a game should not be when a player gets a hit against the Rangers. In fact, you shouldn't be excited about a hit against the Rangers at all. Especially streaks that are not even half way to 56. We also hate when you refer to those players by affectionate nicknames, as they are not Rangers, they are enemies. You made a lot of mistakes tonight, as usual, but this was was especially bad.

Second, I know Alexi Ogando is a temporary starter, and I know there are concerns with his ability to handle a large load, and I know this has been a small sample so far, but. . . I am really going to miss Alexi Ogando when he goes back to the bullpen.

Ogando had yet another good start to bail out a faltering Rangers offense tonight, and continues to provide more than you could ever hope from someone filling in rotation innings during injury. Ogando's fastball once again sat in the mid-90s through an entire start, touching close to 97 at points, and generated eight swinging strikes. Combined with the three whiffs from his slider, Ogando had an extremely impressive 11 swinging strikes in seven innings, helping him put up a career high five strikeouts against one walk.

Efficiency was a little bit of an issue, and while that could be chalked up to an awful strike zone by Vic Carapazza, Ogando seemed to get more beneficial strike calls out of the zone than harmful ball calls in the zone (which is saying a lot) [Update: And, upon further review, his ratio of unfavorable-to-favorable calls was around three or four-to-one, so Carapazza actually had a lot to do with the inefficiency]. He's not supposed to be an ace, though, he's supposed to be a spot starter, and he's spot started beautifully. His pitch count was also inflated by some poor defense, including a ball sailing over Mitch Moreland's head that Nelson Cruz probably gets to every time. The sooner the Rangers figure out a way how to not have Moreland and Murphy in the outfield every day, the better.

Ogando's only run allowed came when Ron Washington inexplicably brought him in to face a lefty Kila Ka'aihue to start the seventh after already throwing 109 pitches. The bullpen was available, and in fact Cody Eppley was already warming. The decision seemed strange, and it blew up in Wash's face with a moon shot by Ka'aihue to make it 3-1. Tom Grieve said something about Ogando being more equipped to handle a lefty than Eppley, but there are lefties in the bullpen, as well as righties who hadn't thrown over 100 pitches. I really don't get it, and the Rangers are lucky it merely altered the final score.

That was the only real slip-up by any of the pitchers on the night, however. Cody Eppley's debut was fantastic. 27 of his 35 pitches were in the zone, half of the batters he faced hit ground balls, his two hits allowed were on soft contact, and not a run was surrendered. He handled two innings with barely a mistake before Darren Oliver threw a perfect ninth for the save.

The pitching was much needed on a night when the Rangers scored three runs, and were pretty lucky to get that many. With only four hits, two walks, and barely any solid contact, the hitters had a combined off night, but fortunately managed to concentrate their success in to two innings to produce some runs. Not exactly inspiring, but you can't be on every night. The great part about having both a good line-up and good pitching is that you can win as long as only half that equation is on. That was the case tonight, with good pitching and just enough luck on offense to eek out a win.

By the way Carapazza's strikezone was really, really bad. He had somewhere around 15 balls called strikes, and as many as 23 strikes called balls. The left handed zone is particularly hilarious, running from around the middle of the plate to about two feet outside. For righties, there was no such thing as a high strike, and low and away was anyone's guess. Thankfully, it looks like it benefited the Rangers more than the Royals, but that just makes it easier to stomach. It doesn't make it right. The Rangers have seen some putrid zones later, and it really needs to be something people complain about in the homes change can come.

Anyway the Angels just lost 5-0, which puts the Rangers a game and a half up in first place. Also, a two run win (and an Indians loss) was enough for the Rangers to retake the MLB lead in run differential with +29 and tie for the best record in the American League. This was also the first time all season the Royals have been dealt a loss in a series, and they need to win the most one-sided pitching match-up of the series to avoid a sweep. Not an exciting game today, but a good day none the less. 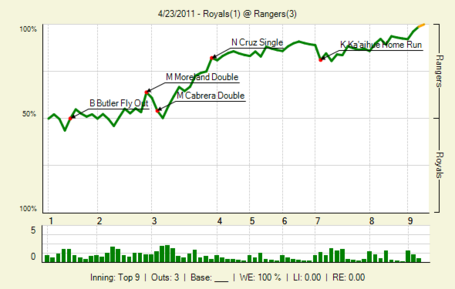