I'd forgotten how good winning feels!

Coming in to the series, this game looked like the hardest (at 55% to win, it was the only game under 60% for the Rangers by the preview). The Rangers were at home, and they're better than the Royals, but a good lefty who lives on a sinker and a sluggish change is terrifying to a Rangers fan.

The Rangers took that hardest game of the series and turned it in to a blowout. Texas jumped all over Jeff Francis, tagging him for nine hits and five runs in four innings, then piled on to the bullpen with great help from the wind. The Rangers didn't hit a single ball that registered as a line drive, but they did have five home runs, at least a couple of which likely would not have gone without weather help.

Every Ranger had a hit, with Ian Kinsler, Adrian Beltre, and Michael Young contributing three a piece. Young continues to murder baseballs, but he also continues to play awful first base. I'm not comfortable saying Mike Napoli is any better, and it has been a small sample, but it seems like even the weakest position in the field might be too much for Young to handle. One more reason a trustworthy centerfielder would be nice.

On paper, the offense looks awesome, because it was, but without some good fortune it's probably not 11 runs. Similarly, on paper, the pitching doesn't look very good, but that's also a bit misleading.

Derek Holland was good tonight. He was not dominant every inning, so you can't call it a dominant start, but he was very good. Nothing he gave up registered as a line drive, and I don't remember him giving up anything hit on a line, either. He had twelve ground balls to two outfield flies (one of which left the park). By the batted ball profile, what Holland put together tonight will more often be around two runs allowed from a pitcher, rather than five. His FIP was just over three runs per nine. He did mess up by allowing his bad pitches to be concentrated in to one inning, and that was from a couple hittable pitches, but even solid contact on hittable pitches doesn't usually result in that level of offense, and his home run was a wall scraper.

It's certainly not that Holland was unlucky not to pitch a shutout, but he was unlucky to give up fully five runs in one inning, and outside of that bad-but-not-as-bad-as-the-line suggests, he was awesome. A pitcher who struggles with efficiency managed to go seven innings even after a fourth inning mini-meltdown! He struck out nine to just two walks! 73 of 108 pitches were in the zone! His fastball topped 95! He averaged fully two swinging strikes an inning!

You obviously cannot remove the meltdown inning from the equation (if you did, this would have been the best start of the year for the Rangers), but you also can't dwell on a single inning and pure runs allowed above all other indications. There's also something to be said about a pitcher with frequent maturity questions settling down after allowing a team to go from 5-0 to tied in one inning coming back and dominating, ending with an eight pitch seventh. Holland did not have a great start tonight, but if he wants to put up a 9:2 K/BB ratio with two whiffs an inning, he's going to give up a lot fewer than 6.4 runs a game. If the Rangers had lost because of that fourth inning, there would be reason for angst over Holland's inability to pitch to his talent every inning (or at least more evenly distribute the mistakes). Since they won, in the blowout, I say look instead at what Holland did that was great and be excited about him doing more of it.

The bullpen told a similar story, as well. Pedro Strop played the role of Holland's bad inning, getting just one out while giving up two walks and allowing a run. The ancient lefties Arthur Rhodes and Darren Oliver played the role of encouraging signs, with Rhodes striking out both hitters he faced and Oliver pitching an easy ninth inning to finish things off.

Tonight went a long way to relieving the pain of the last two games. Not that the Rangers shouldn't beat the Royals, but pounding inferior competition is still a good sign, and starting off a series with a win in the toughest game is a great sign.

At this moment, the Red Sox lead the Angels 3-0 have beaten the Angels 4-3, so first place may even be is back in the Rangers' grasp by the time you go to bed. As it should be! 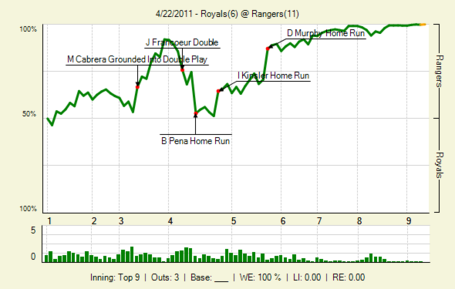