Series Preview: Rangers Look To Use Royals To Stop Skid

The Rangers host a team with a better record for the first time in 2011, without their reigning MVP, and without a centerfielder the manager can trust. They should probably be expected to win, anyway.

Share All sharing options for: Series Preview: Rangers Look To Use Royals To Stop Skid 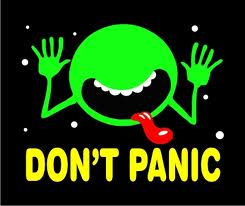 Half a game back is nothing. Heck, Baseball Prospectus still thinks the Rangers make the playoffs more than two thirds of the time the rest of this season is played. Boy does blowing a lead like the Rangers had so quickly hurt, but it was worse when they were three games back in to last place and two games under .500 at this point last season. All Texas has to do is get back in to first place and, this time, hang on to it for a few more months.

That can start as soon as today against the team that is now where the Rangers were not too long ago. The Royals are a team with an apathetic fan base that has not seen real success in a long time, just like the Rangers most of last decade. They have put through questionable trades, have an apathetic local fan base in a market that would likely support a winner if they got one, and people from New York think of them as being a part of the rugged American southwest, all just like the Rangers. And most like the Rangers a few years ago, they have an exciting and deep farm system full of incredible talent they will soon be building around.

Unfortunately for the Royals, that talent is mostly not yet at the Major League level, and they recently parted with their best player over the last several seasons. So while the future looks pretty good, the present does not.

The Royals sit at 12-7, just a game back in the central, and with a better record than our own Rangers. Baseball Prospectus thinks they've been a bit lucky, but luck doesn't make 12 wins before April is even over go away. It cannot necessarily be expected to continue, just like in 2003 when Kansas City started 15-3 and struggled just to beat .500, but for the time being their fans have hope.

It is nothing personal, but the Rangers need to crush those hopes. At least for one weekend.

As usual, by the way, remember to check Christopher's always great preview on Lone Star Ball.

Raise your hand if you had Jeff Francoeur as one of the best players in baseball this year. By FanGraphs' estimation, he's already produced more than a win more than you can typically expect from an MLB scrub. Someone like what you usually get from Jeff Francoeur. Small Sample Size and all, but two of the earliest things to become reliable in a Major League season are a player's swing and contact rates. Right now, Francoeur is setting a career low in his rate of swinging strikes, a career low in his rate of offerings, and a career low in his strikeout rate. His pathetic plate discipline has made him a disappointment to many, but he may well finally be settling down at the plate and turning in to a good baseball player.

Jeff Francoeur is not the only disappointing prospect sitting in the Royals' top five. Right behind him is Alex Gordon, but while Francoeur is showing actually signs of improvement, Gordon is putting up a .429 Batting Average on Balls In Play. In other words, he has most likely been a mirage so far. Same story for Wilson Betemit, who is on pace to have a career year, but that is thanks to a .471 BABIP.

Francis doing well is a bit disheartening, as he was a guy many thought the Rangers could maybe use this season. Right now, he looks like a guy the Rangers could definitely use this season, but he would likely be replacing an Ogando or Holland or Harrison, all pitchers who have done well in 2011. It does not mean having Francis would not be nice, but the Rangers would probably not be doing much, if any, better right now with him.

These players, by the way, are ranked by FanGraphs' Wins Above Replacement. If there is a stat here you do not recognize, use the glossary at the bottom of the page for edification. 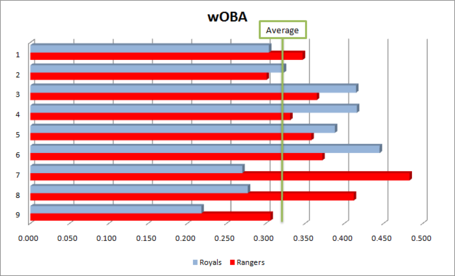 This compares both teams in weighted On Base Average (OPS with better weights on an OBP scale, basically), purely on what they have done in the small sample of 2011.

The Royals offense so far looks fairly stout, with only easy outs at the back of the order and a vicious 3-6 stretch. That 3-6 is bookended by Gordon and Betemit, though, and we have already discussed their flukey BABIP rates this season. Butler is for real, and Francoeur is looking like he might be for real (and he faces two lefties this series), but the Royals offense is probably not quite as scary as the season so far has made it look.

One guy we are likely to see in the series not listed is Mike Aviles, who has gone from not getting enough Rookie of the Year votes in 2008 to becoming a utility infielder. He has started more than half the games, however, mostly at third, but some at second. His .326 career wOBA (.290 in 2011) is actually more than you could ever hope for from a back up middle infielder, too, so he provides a nice piece for Kansas City.

There has been a lot of carping about the Rangers' offense lately, but they still look quite good on the year, with everyone short of Elvis Andrus and Yorvit Torrealba hitting above average. It should also be noted that offense appears to be down so far in young 2011. American League teams are scoring about a run fewer per series (three game) than they did in 2010, and the MLB average wOBA has dropped from .321 to .317. It is early, but not too early to start considering that 2011 might well be another consecutive season of offensive drop-off, and when we evaluate team wide production we need to look at it through that lense.

This is the line-up, by the way, that includes David Murphy and Mike Napoli, since the Rangers will face two lefties and seem to hate Julio Borbon's guts. It looks good here, it will look very bad later. 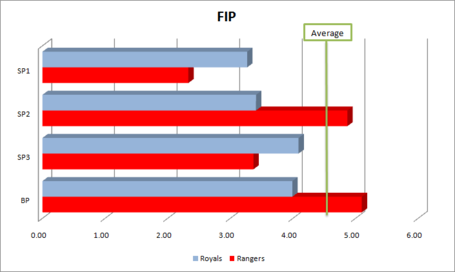 How often do you see two games in a series featuring lefties starting on both sides?

Francis is having a seriously down year in strikeouts (4.87 K/9), but he so far he is walking hardly anyone (1.00 BB/9), which continues a somewhat steady stream of improvement in the walks department for his career. He lives off of throwing mostly a glacially slow change-up and a brutal sinker. So, he is left handed, and he throws a change-up or a sinker most of the time. Does that not sound like fun times for the Rangers? OH BOY!

Kyle Davies is, so far, having something of a career year, with a career high K/9 (7.2) and nearly a career low BB/9 (3.6). He is even keeping the ball in the park at a career best rate, but thanks to a hilarious .420 BABIP, no one is noticing because that means a 7.20 ERA. At 27, Davies is the right age to have a career year, but he might end up being very sad if his peripherals regress to their norms before his ERA stops being ridiculously unlucky. No one will have noticed how good Kyle Davies was for, like, a month! As far as repertoire, Davies is kind of your standard MLB pitcher. He throws a fastball in the low 90s about three fifths of the time, and splits the rest of the time with a change-up that comes in seven miles per hour behind the fastball, and a breaking ball. Boring, right? The breaking ball is a curve in this case. Whoever was making Kyle Davies got bored of giving people sliders. He also has a pitch that was once registered as a slider and now registers as a cutter that he throws about once or twice an inning.

Chen is having the opposite year of Davies. He is a guy no one expects to be good, but so far he has a 2.42 ERA, despite a career low strikeout rate. That is because of a .250 BABIP, of course. More than likely, Chen will soon go back to being the bad pitcher he always has been. He has a wide repertoire of fastballs with movement, a a fluttery change-up, both a slider and curve, and nothing that touches 90 miles per hour. He does not take much time between pitches, which is always a plus.

Believe it or not, the Royals' great bullpen this year is not so much because of Joakim Soria, but because of Aaron Crow. With 11.1 innings pitched, he has a 1.95 FIP and has not yet allowed a single Earned Run. 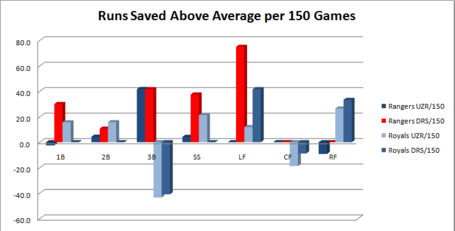 This chart is mostly worthless, because Nelson Cruz is most definitely not a guy who is going to save 70 runs a year in left field, like Defensive Runs Saved suggests. It is hilarious, though.

This is the point where David Murphy does not look like a good thing. Between DRS and UZR, Murphy looks like around 25-30 runs below average in the field in center. That is a very small sample and probably a tad extreme, but a solid left fielder playing around 20 runs worse in center is no stretch, and Julio Borbon is not merely average in center. Texas seems to think one player in the line-up can kick start the whole order, but as long as Murphy plays centerfield, a lot of runs are probably going to be given up there.

Even with Murphy playing, the Rangers actually look better than the Royals defensively (when you look more at career rates), thanks to names like Beltre, Cruz and Andrus, only to the tune of about a third of a run over a full series. The edge goes to the Rangers, but with the larger edge on offense comes a smaller edge on defense.

Okay, the small sample sizes seen on the season are funny, but not that great for projecting. To set our expectations on the upcoming series, ZiPS projections and career defensive rates are bit more useful in April. Putting the exact match-ups from this series up against each other 10,000 times turns out a spread of Rangers wins that looks like this: 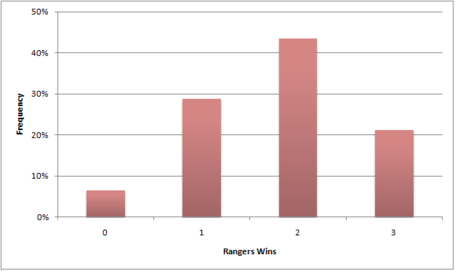 In short, if the Rangers play like they are expected to, and if the Royals play like they are expected to, the Rangers break their stretch of series lost just over two thirds of the time, sweeping the series in just over one fifth of their attempts. The total score projects to be around 15-14 Rangers, a little less for Kansas City, and a little more for Texas.

Bruce Chen vs. C.J. Wilson looks, by far, like the most one-sided game, nearly a two-to-one Rangers advantage. Which, of course, means the Rangers will be looking at sweeping that day and fail, but at least they will have won the series.

Missing Josh Hamilton and not being able to trust the intended centerfielder puts the Rangers in a rough situation, but despite the records, the Rangers are likely the significantly superior team to Kansas City, and they are playing at home (which is around a 4% improvement for teams). The Rangers absolutely should win this series, and if they do not, it might be a little closer to time to panic.