Just like that, in the span of little more than a week, the Rangers have gone from dominant to second place. While they have not completely undone their early hot start (they remain, after all, on pace for 99 wins), they've taken a huge step back to reality in a short period of time. Obviously you don't expect a 9-1 start to the season to continue, but those games in hand are valuable, and they do soften the blow of losing three series in a row, but you'd rather it be softening the blow of regressing to expectations, rather than below them.

Hopefully tonight serves as a lesson re: centerfield defense. Julio Borbon has become an infuriating, disappointing player, but he is a very good defensive centerfielder, and the only Major League-caliber centerfielder in the Texas Rangers organization (other than the guy on the DL right now). It's unfortunate the Rangers are in this position, but playing David Murphy in center is not the answer. That was shown early when a fly ball Borbon usually turns in to an out sailed over Murphy's head and turned in to a triple for new Ranger killer Peter Bourjous. Fittingly, Bourjous then saved a run by robbing none other than Murphy of a home run.

Perhaps the answer is not carrying Chris Davis on the bench of a 25 man roster that already has three guys playing first base, but instead giving someone like Craig Gentry a shot at forming a center garden platoon with Borbon.

Then there's the bullpen. Darren O'Day continues to struggle in 2011, hitting two tonight and allowing a home run, and Neftali Feliz walked three straight hitters before finally retiring the side. Bullpens are not something you can usually be confident on. Relievers will vary from one year to the next, there jobs consisting of performance over a small sample in high leverage situations. The fact that the bullpen was good last year doesn't mean it will be this year, and that's just one of the more terrifying aspects of baseball. Of course, that also means in two days Darren O'Day could start being good again, small samples.

The offense was also infuriating tonight. Jered Weaver is a good pitcher, a really good pitcher, but that doesn't mean he should be throwing complete games on the road against supposed elite offenses in hitters parks, with only a single run allowed. The Rangers had FIVE infield flies. They worked ZERO walks. There was some poor luck on balls in play and some good Angels defense, and, again, Weaver's really good, but the Rangers helped Anaheim out with hacking at pitches in an effort to produce weak contact. Ian Kinsler and Nelson Cruz, in particular, are not just struggling statistically right now, they actually look bad at the plate. In his four plate appearances, Kinsler saw all of 12 pitches, which was good for two pop ups and two strikeouts. I would doubt it continues, but for the time being it's not fun, and the longer it goes on the more concerning it becomes.

Hitters struggle, though. That's the ebb and flow of baseball. We watch the game to see humans succeed and fail in ways we don't expect. Some humans. We don't watch to see the humans who officiate the games succeed or fail, they are supposed to do their jobs, and minor league umpire John Tumpane did not do his. No umpires call the low strike in baseball, but he took it to a new level.

Looking at pitchf/x (you can see the chart at the bottom), I count approximately 16 pitches thrown in the zone called balls, around half of which were nowhere near the edge. Of those 16, 11 were thrown by the Rangers, mostly low in the zone. I count 11 pitches well outside the zone ruled strikes, most low and away, especially egregious against lefties (like the low strike, typical, but not usually this bad). Five of those were thrown by Angels.

There's something to be said about expecting a good pitcher to adjust to the umpires zone, but that doesn't excuse the fact that Major League Baseball is okay with mistakes like this. I fully believe umpiring is hard, especially for a minor league call up like Tumpane, but that's exactly why MLB should be looking in to improving it. We don't watch for the suspense of whether or not a ball thrown two inches outside the zone will be called a strike, we watch for the suspense of whether or not Michael Young will park the pitch that actually is a strike. Get on it, Baseball.

Or, more accurately, get on Baseball, fans. Nothing changes until we let baseball know as a mob that we want change.

All this ranting aside, there are good things to take from it. Texas didn't hit well, but they hit better than one run suggests. On the other side, four runs isn't exactly a defensive melt down, and without David Murphy in center or a weird ball hopping off of Adrian Beltre's glove to where Elvis Andrus would be if he didn't have range for miles, Anaheim doesn't even get to four runs. This wasn't an all-encompassing destruction that causes you to worry like yesterday, it was simply a loss. It was a loss that continued a 3-6 run and dropped Texas to second place, and it was frustrating to loss, but it was just one of those things that happens in a baseball season.

Most awesomely, though, was Matt Harrison. Harrison was not dominant tonight, but he was once again good, something he has at least been in every start this year. He was efficient, he continued to display good stuff, he battled back from awful situations, and without the defensive mistakes he likely goes deeper than six and two thirds and likely gives up fewer than three runs. This is beautiful coming off of Colby Lewis's start last night. Matt Harrison reaching his potential would be all it takes to make up for a disappointing year from Colbyashi if indeed that continues.

This stretch of the year has been brutal. When Texas traveled to Detroit, it was easy to picture them running away with the division from the get go, and now it looks like they have work to do after all. Disappointing, and the usual "get 'em tomorrow" refrain doesn't work before an off day, but there's no reason to panic yet. Just reason to be really, really angry.

Oh, and on one final note: Dave Barnett is a much better TV play-by-play man than John Rhadigan. Please take note, Rangers brass. 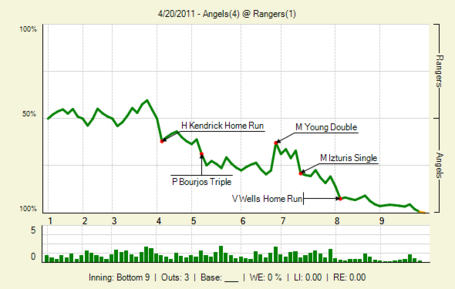