This is where I should probably say something about being cautious about rising expectations or something like that. The Rangers have won all of two games, still do not know much, if anything, more about the season than we did two days ago.

But if you want to go ahead and be excited, have at it. Why not? The Rangers have now opened the year with at least a series win over the 2011 Pre Season World Series Champions. And not just a series win, but so far a 21-10 series win. The Red Sox are scoring off of the Rangers as a team at about the rate they probably should be, but the Rangers are absolutely having their way with Boston pitching.

It was hard to imagine a better way to start the season, and it would be hard to imagine a better follow up in game two. Perhaps better starting pitching is about it. Colby Lewis managed a quality start, which looks nice, but it wasn't exactly inspiring to watch. Over his six innings pitched, he managed to throw strikes just 60% of the time, and while he managed nine swinging strikes, two came against Jarrod Saltalamacchia; that barely counts. Most disturbingly, the slider looked flat, but his supposed recrafted change up worked well, getting hitters to whiff one-out-of-five times he threw it.

It's not that Colbyashi had a bad game. Again, Quality Start, and the other guys were the Red Sox, a brutal and patient offense. He only walked two and struck out four, not bad at all. He was just the closest thing to a black lining on the glorious, bright, silver cloud.

The offense, meanwhile, was stellar. The pitcher today was not Jon Lester, but John Lackey is no slouch, and the Rangers knocked him around like Rule 5 pick. Every single Ranger had a hit. Ian Kinsler became the first player ever to start each of the first two games of the season with a lead off home run, and Adrian Beltre grand slammed his former team. The weakest guys in the line-up all went for extra bases, with triples from Julio Borbon and Elvis Andrus, doubles from Andrus and Yorvit Torrealba, and a home run from Torrealba on top of it. Adam J. Morris at Lone Star Ball observed a lot of hate directed at Borbon over the last 24 hours, and considering he responded by going 2-for-4 with a triple, maybe fans should keep up with the motivation.

And there likely would have been even more offense if not for suppressive winds. Josh Hamilton, in particular, tagged a ball late in the game that looked headed for deep parts of the ballpark, only to die at the track. I do find it ironic that a starting pitcher who managed to get just 4.01 runs of support on average for a team that scored nearly five runs a game last year finally got a ton of support but couldn't find his best stuff. Baseball.

Right now, the Rangers' pitching looks fine, and the Rangers' offense looks otherwordly. They are running away with one of the hardest series they will play all season, the kind of series they can worry about if the prevail as favorites in the AL West. This has been probably the most exciting off season in franchise history, and they have done nothing but ramp those feelings in the first two games of the season.

You know, I actually feel a little bad for the bandwagon fans of the Rangers. How often is a baseball team this fun to watch, with this many exciting all-around talents, this much laughter, or this much awesomeness? If someone is just getting in to baseball because the local team is good, they may be led to expect all future Rangers teams to be this much fun. They might just get disappointed. Hopefully they end up becoming full baseball converts by then.

One final note on John Rhadigan: he was bad today. Way too many mistakes. Wrong locations called for hits. Wrong players' names called. Another use of "there ya go boys," to call the game, when something like, say, "Rangers win" would be better. And he seems completely hopeless on deep fly balls. He seems like a good guy and I want him to do well, but he has no play-by-play experience and it's showing. Hopefully it clicks before too long. 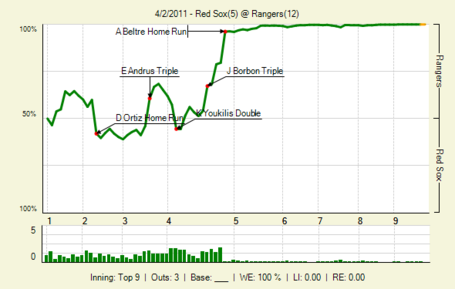