I didn't get to watch anything after the fourth inning tonight. My phone died, so no MLB.tv, and I got to run around town to get a new battery in my car, then I got to run from Lowes to Home Depot to Wal-Mart looking for someone who could make a copy of my key (none of them could handle this task).

It would seem this made for a better evening than watching the Texas Rangers play baseball.

The Rangers entered the night with a 30 run lead on Anaheim in run differential. In one night -- their first home loss of the season -- the Angels cut that by more than three quarters. Prior to tonight, Texas held the lead in run differential from the outset of the season, and though they remain second (as of this post), they are as close to the first place Indians (seven runs) as they are to the Angels.

Tonight, one single game, accounted for nearly one quarter of the runs the Rangers have allowed on the year.

Just one game, but one really, really awful game. A pathetic performance by the pitching and defense that allowed the Angels to have a chance to leave this series with a lead in the division. In a long season, this game may well become insignificant, but in the sample of a 17 game season it's enough that you probably couldn't put the Rangers at the top of your power rankings or what have you after tonight.

It might be time to panic about Colby Lewis. He has not yet had one good start on the season. Tonight he lasted just five innings, gave up a constant barrage of flyballs, struggled to get the ball over the plate (58% of pitches in the zone, three walks surrendered), and, most disturbingly, continued to fail to reach his 2010 velocity. His fastball averaged under 88 miles per hour, and never hit 90 even once, and caused just one single swinging strike. The slider and change got their whiffs, but if Colbyashi can't get his fastball up to previous levels and can't miss bats with it, he is in serious trouble without some sort of amazing adjustment.

Colby Lewis failing to come even close to his 2010 performance wouldn't necessarily sink the Rangers, but someone would have to outperform expectations for the Rangers in 2011 to hit theirs. Be it Matt Harrison continuing to shine or some hitter having a career year, someone will have to step up. It's still just a small sample for Lewis, of course, and this start may have been partly due to rust from a missed start and the distraction of the birth of a child, but a concerning trend continues for him. It could suck if it doesn't stop.

It wasn't all on Lewis, of course. In Michael Kirkman's first appearance of the year, he couldn't get a batter out to save his life. Just one strikeout over eleven batters faced, with six runs allowed, including a home run surrendered to Peter Bourjous is very not good.

Nothing was good tonight. Four runs from the offense isn't that bad, but in a game that features Matt Palmer and the Angels' bullpen, played in Rangers Ballpark in Arlington, it's nothing to be happy about.

This is undoubtedly the low point of the young season. Let's hope it stays the lowest point well in to October. 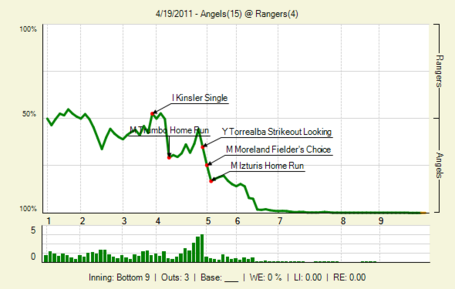 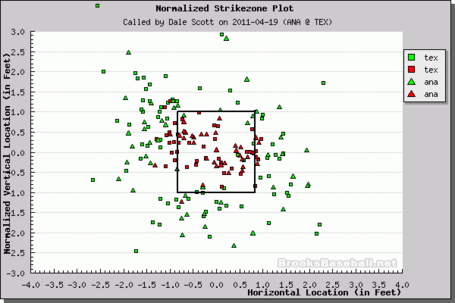