A mediocre road trip for the Rangers, coupled with a hot run by the Angels, allowed the Halos to tie Texas at the top of the AL West.

In the teams' first match up of the year, the Rangers made sure that tie was temporary with authority.

It may be just one game, but tonight served as a highlight that, so far in 2011 and most likely going forward as well, the Rangers and Angels are not equal. They may have been in record coming in to today's game, but Texas is the better team on paper, and has been the better team this young season. That's indicated in the Rangers' 30 (THIRTY!!!) run lead in run differential, and the Angels haven't had to go to Yankee Stadium yet.

Texas is better. The series isn't over, but they served notice of that tonight.

Hey, look! The offense is back! The Rangers smacked Ervin Santana around even more than six runs in four innings suggests. Most of the Rangers at bats ended in either a deep fly ball or a line drive, with great contact all over the place. With a handful of warning track outs, and an early baserunning gaffe by Ian Kinsler costing a run, LA was probably just a little lucky to hold Texas to seven runs (though the Rangers' batted ball profile suggests around six runs, so maybe I'm being too generous). Also encouragingly, the top of the order looks to have broken out of its slump, with a double, a triple and two walks from Kinsler, and three hits from Elvis Andrus (and great plays in the field from both, to boot).

And while the offense returned to great, C.J. Wilson had his first great start of 2011. Maybe he felt he could challenge hitters because he was facing a weak offense, but it's always nice when he doesn't nibble, and 74 strikes in 116 pitches isn't nibbling. Ceej went seven innings with just one run allowed and hardly anything hit out of the infield., and most impressively struck out nine Angels, with nine swinging strikes, to just one walk surrendered. With more hits allowed than you'd expect to a team striking out more than once an inning with very little solid contact, Wilson wasn't able to go deeper than seven, but it was more poor luck and less being horribly inefficient. It was a masterful start, and hopefully the first of many in 2011.

The Rangers made sure tonight they will not be any worse than one game back in the division by series end, and made it pretty likely they'll actually increase their lead. They also served reminder that they are the best in the west in 2011, no matter what kind of speed bump two games in Detroit provide. 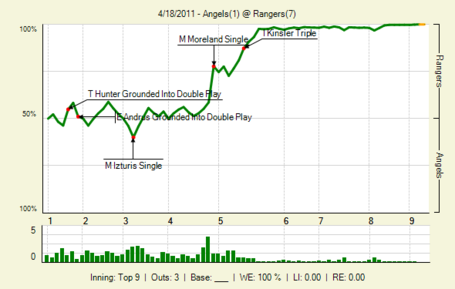 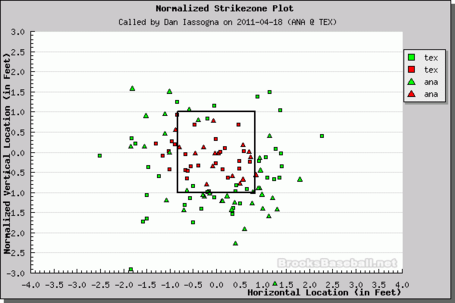