Yet Another Rangers Win

Share All sharing options for: Yet Another Rangers Win

Ten games in to the year, the Rangers have just one loss. There is only one possible better result in the "Last 10" portion of the standings in the newspaper. It took them 10 more games in 2010 to get to nine wins, during a climb to .500. At the time of this writing, the Angels are losing by four, and while it's early, if they do lose, that would give the Rangers a four game lead in the division, something they didn't get to until nearly midway through last season (game 72). In my most optimistic dreams, the Rangers' title defense did not start this way. What an absurd head start.

The head start was extended by fill-in starter Alexi Ogando beating elite ace pitcher Justin Verlander on the road in a pitchers' duel. Seriously, that thing happened. The Rangers threw their second straight shutout, to boot. Unfortunately, Ogando had to be pulled early due to a blister as he took just 79 pitches to get through seven innings, and could have been on his way to a shutout.

The game had some weirdness, too. With a runner on second, two outs, and a runner on second in the ninth, Ron Washington elected to have Neftali Feliz intentionally walk Miguel Cabrera. In other words, he chose to put the tying run on base and bring up the winning run to the plate. That is the wrong thing to do. The only argument for it being the right thing is based on something like gut feeling or some sort of silliness like that and not reality.

This is pretty simple: you walk Cabrera if you think the odds of him hitting a home run are so high you'll take the odds of the next guy hitting a double. That next guy was Victor Martinez, not a pitcher, thus, you do not allow the winning run to come to the plate if you can help it. An intentional walk is not helping it. At worst, Cabrera represents an opportunity to tie the game with one swing. Most likely, he will get out and the game will end because, as good as he is, Cabrera's OBP is still well under .500. More likely than tying the game, he will make it a one run game and THEN the winning run comes up after you've correctly played the odds but failed.

Refer to the following chart as a visual aid: 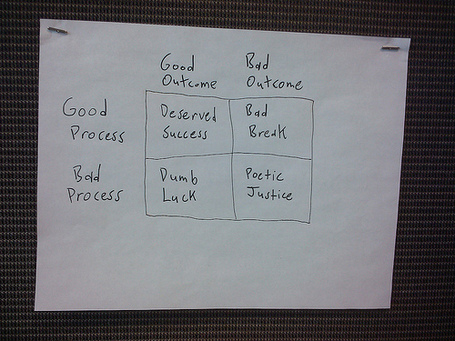 Walking Cabrera was squarely in the bottom left corner. It was not so much lucky that Martinez grounded out because, like Cabrera, the likely result is an out. But the point is that, just because it "worked," doesn't mean it was smart. It wasn't, it was very dumb. The odds of Miguel Cabrera hitting a home run are much smaller than the odds of Victor Martinez hitting a double. The odds of Miguel Cabrera hitting anything are actually pretty small, period. Remember, there were already two outs, so this wasn't even a "setting up the double play" situation. This was willingly making the game harder to win based on one guy being "scary" or something.

From a statistical view point, the walk dropped the Rangers' win expectancy from 4.8% to 9.2%. So it very nearly doubled the Tigers (small) chances of winning. Now, that assumes both hitters are the same, and we know they're not. Cabrera has a career .566 slugging average against righties, while Martinez is a career .465, so the drop off is probably not quite that dramatic in WE, but you're also still not really going from a great hitter to a pitcher.

On top of all that, the pitcher on the mound was one of the best relievers in baseball. What sort of message does this send to Feliz? Why are you not having your closer do the right thing and get the out? This was wrong and as much as I've come to love Ron Washington he still insists on doing these things now and then that are just infuriating.

But, no harm done. Over the long run, this nonsense does not end up making a dramatic difference on the season, and it's hard to be too angry when it was still a win.

Go Rangers, keep it up. Just without silly IBBs. 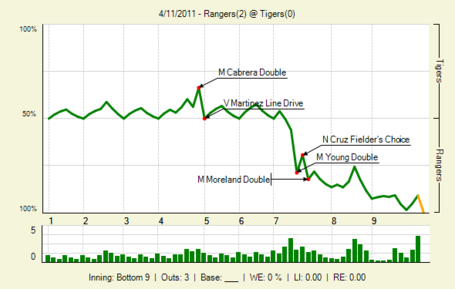 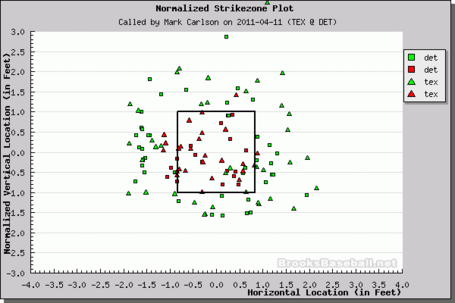