Texas wins again. Eight days of Rangers baseball, eight Rangers wins. Every time one part of the team seems to slack a little (today the offense, just a little), another part seems to step up (today the pitching, quite a bit). The Rangers' pitchers combined to give up just two extra base hits and only one line drive (by FanGraphs' designation). All the offense came on home runs from Adrian Beltre and Ian Kinsler, but it was more than enough for the dominant pitching performance, closing the series out with the Rangers winning two of three in Baltimore.

The Rangers' first road series of 2011 started with a speed bump -- their first loss of the year -- but by the end of the series it seemed barely significant. Despite a loss, Texas went in to Baltimore and whipped them 16-6. That's a pythagenpat expectation closer to a sweep than two-of-three, if you're wondering (ON THE ROAD). In just nine games, Texas is already the first team in baseball with a +32 run differential. Losing didn't lead to the Rangers slowing down, it was just a minor setback.

Nine games is still a small sample, but every game added makes it less and less easy to shove off as insignificant. The Rangers are rampaging through the season so far, and though we have no idea how much of the year will be like this, it's a tremendous head start to a title defense, and completely awesome for the time being.

Derek Holland could still stand to be efficient, but this is the second time through the rotation he's looked good. He and Harrison could keep this up and be huge. Of course, if two times through the rotation is enough to make up opinions, we'd be afraid of Colby Lewis. 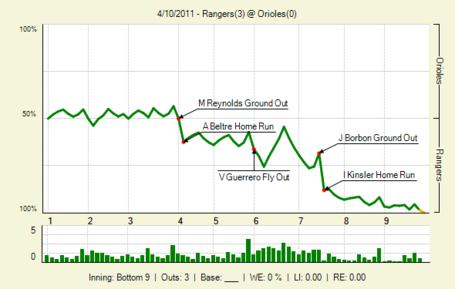